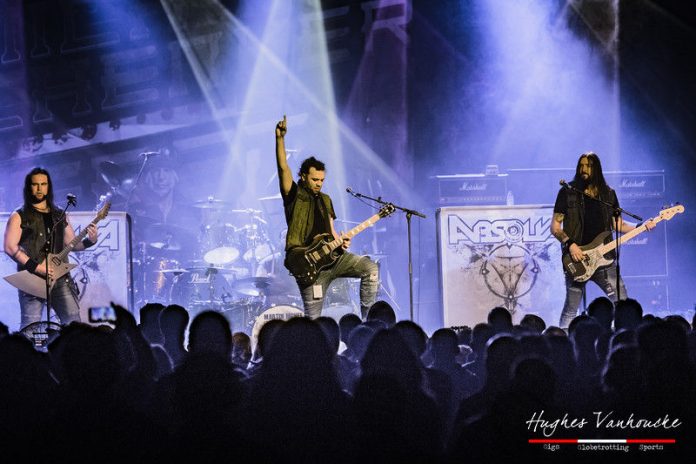 Absolva are to complete their 2019 live performances with two shows of special significance.

Firstly, they are special guests to Power Quest at London, Garage, on 16th November, where the headliners celebrate their famous 2003 album ‘Neverworld’. Power Quest will also be joined onstage by various guests including Sam Totman of Dragonforce and Tommy Johansson of Sabaton.

Absolva’s final show of the year will be headlining Academy 3 in hometown Manchester, on 21st December, which will be a special celebration of the band’s 2012 debut album ‘Flames of Justice’. Absolva will be joined onstage by Power Quest’s singer Ashley Edison and former-Absolva guitarist Tom Atkinson, who now fronts heavy metallers Vice. The line-up that night will be completed by special guests Vice and Stormrider.

Absolva’s setlist for this show will feature the majority of songs from ‘Flames of Justice’ plus one or two other surprises.

Frontman Chris Appleton says “We’re always excited to play shows in London and of course our hometown Manchester, but this year it’s something extra special as we’re guests of Power Quest for their wonderful celebration of the Neverworld album, then Ashley Edison’s guest performance with Absolva and guitarist Tom Atkinson re-united with us for the Manchester show”.

Absolva was formed in April 2012 (from the ashes of the popular 3-piece Fury UK), and later that year released ‘Flames of Justice’, along with a tour as special guests with American heavyweights Iced Earth and an inspired set at Bloodstock Open Air. A relentless touring schedule and three further studio albums have followed and a fourth is currently on course for release in 2020. The band also doubles up as backing band for Blaze Bayley (Iron Maiden singer 1994-1999).

For further background please visit the band’s website at www.absolva.com