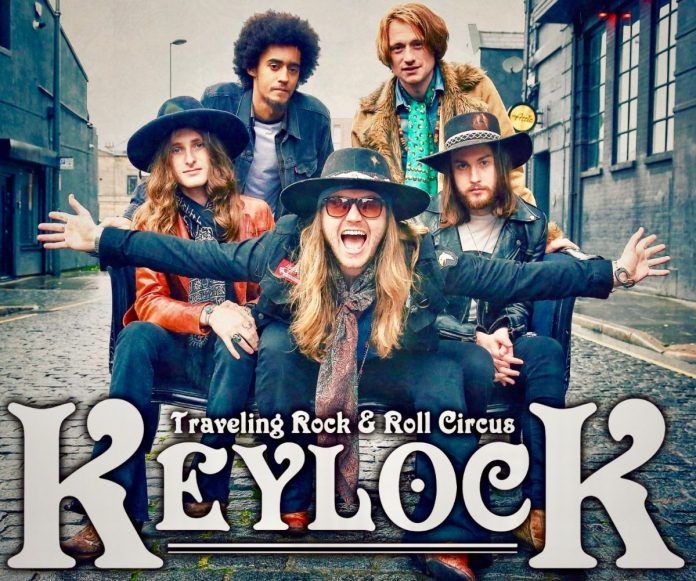 After eighteen months of rehearsing and planning the launch of his new dream band, twenty year old British guitarist Aaron Keylock is thrilled to announce that Keylock, the Traveling Rock & Roll Circus will release their first ever new single “Coming Home”, on Oct 11th 2019 via 7Hz Productions (Warner ADA)

An epic seven minutes and thirty seconds long, “Coming Home” has plenty to say and a story to tell. The band slow-cook the riffs beneath singer Jonnie Hodson’s vocal odyssey of finding his way back home before dissolving into internationally acclaimed guitarist Aaron Keylock’s liquid guitar solo, picking up where words can no longer tread.

Keylock have unlocked the door to a treasure trove of golden seventies sounds, and the good-times five piece wear their heart on their sleeve for this first banger of a release.

Aaron himself says: “I’ve known for a long time the type of band I wanted to put together and wasn’t prepared to rush it. We call ourselves a Travelling Rock ‘n’ Roll Circus and our live show is going to take the audience on a fantastic musical journey. ‘Coming Home’ is a celebration of our new identity and we’re really looking forward to delivering our first ever release”

On “Coming Home”, Keylock rock their way through influences ranging from Free, The Faces, The Allman Brothers but most of all, this band has its roots embedded in the long extended jams of The Grateful Dead and will often stretch their live arrangements into truly psychedelic and mesmerizing jam sessions.

The band have been gigging their way across Europe for the past few months, performing at summer festivals, building up their chops and brotherhood together. With the band truly settled into their new musical direction they laid down “Coming Home” at London’s Stakeout studios, produced and mixed by Spanish producer Guillermo ‘Will’ Maya (The Answer, Voodoo Vegas, Panic Cell).

So, get your flares and cowboy boots on; light a candle and some mellow incense and finally, kick back to the rock n roll sunshine coming out of your speakers that is Keylock the Traveling Rock ‘n’ Roll Circus.