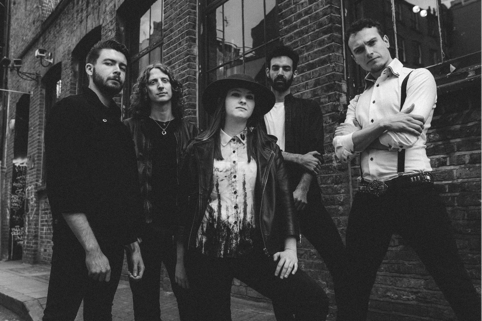 Aaron Buchanan And The Cult Classics proudly unveil the powerful new video for  Dancin’ Down Below and with its riotous hooks it will impress.
Dancin’ Down Below  is taken from their recently released debut album The Man With Stars On His Knees. The band will showcase this dynamic debut at festivals through-out the UK this summer including: Download Festival, Wildfire Festival and Ramblin’ Man Fair.
The Man With Stars On His Knees is informed by the sharp musical intelligence of Aaron Buchanan And The Cult Classics. “A lot of thought went into making an album that made sense. For a few years, I was so confused, tense and lost that I had more ammunition than I had ever had before to write lyrics and melodies that took me through the realms of anger, upset, uprising and all manner of feelings that probably manifested under a blanket of pressure and time.”
After leaving Heaven’s Basement, Buchanan formed The Cult Classics with sibling Laurie Buchanan on guitar, Tom McCarthy (guitar), Chris Guyatt (bass), and Kev Hickman (drums), as he  “wanted to be true to the art in [his] mind, and the sound”, “I’m proud to fly the flag for something a little different.”
Recorded at Plus11 Studio with long-term friend and producer James Curtis-Thomas, the resulting dynamic and fulfilling The Man With Stars On His Knees comes from “doing what musicians do best. Creating.”
The record kicks off with Show Me What You’re Made Of  as thunderous as prime Soundgarden and as kooky as MUSE and sets the tone for the whole album. The singles follow; first the lyrically purposeful and autobiographical All The Things You’ve Said And Done is an angry kick to the teeth and the first song Buchanan wrote for the album. It bristles with conviction while the Iggy Pop inspired Dancin’ Down Below with its riotous hooks follows.
This album is about struggle “bought on by surrounding yourself with the wrong people at the wrong time. What comes of that is negative energy. It’s the reason the album has such unique titles on it.” The Devil That Needs You talks of un-helpable addiction, A God Is No Friend speaks of not knowing what to turn to next be it a higher force or your next hit on whatever next passes by in the shop window of life, Mind Of A Mute speaks of how judged I felt over the years, there’s so much meat to this record. I don’t believe I could have written something like this without having been beat to an absolute pulp.”
You never find yourself in the presence of music that sounds self-consciously clever, everything flows before the incredibly elegant Morals, a showpiece song, stacked harmonies closes the album in the best possible way.
Every one of these 10 songs is a master class in how to write melodies that pull the heartstrings while refusing to rein in the balls-out instincts. Combined with the combination of fearsomely virtuosic metallic riffing, solid pile driving rhythm section and Aaron’s versatile and soulful voice ensures that The Man With Stars On His Knees is a colossal and essential debut.
It was important to the band to keep the album-circle tight. They didn’t want outsiders getting in on it and the album was like “a speakeasy, nobody knew anything about it unless they were on the inside and it stayed like that for months. Ryan Woods (bass/guitars on album) had a friend, Sam Mayle who had followed Buchanan from the previous band – it just so happened he was an insane artist. Ryan showed Aaron some of his work, amongst them a portrait of a singer from a great band of the mid-noughties and Aaron loved it so much because of the colour and detail that he asked him to do a version of it for the album in question, through this, the striking cover image was born.
Aaron Buchanan believes and understands rock music can be both an unalloyed pleasure and a conduit for ideas, a means of provoking thought, a world in which you can reinvent yourself at the same time. And this has been achieved with the astonishing The Man With Stars On His Knees. “It’s inspired by many records, writers and voices from Eddie Vedder and Scott Weiland through to Queen and Manson – but it stands alone in it’s own cabinet of approval. The Man With Stars On His Knees was built for curious ears.”
The Man With Stars On His Knees retools every aspect of Buchanan’s story so far into something bigger, bolder and more emotionally potent. This brilliant and provocative artist has produced a hugely appealing and a simultaneously intricate and infectious debut album that deserves your attention
The Man With Stars On His Knees  is an enabling vision and unequivocal triumph.
The Man With Stars On His Knees track listing
01 Show Me What Your’e Made Of.
02 All The Things You’ve Said And Done.
03 Dancin’ Down Below.
04 The Devil That Needs You.
05 Journey Out Of Here.
06 The Man With Stars On His Knees.
07 A God Is No Friend.
08 Left Me For Dead.
09 Mind Of A Mute .
10 Morals.
To order the CD go to:
http://www.pledgemusic.com/projects/aaronbuchananandthecultclassics
Aaron Buchanan And The Cult Classics UK dates
June
11th Download Festival.
25th Wildfire Festival.
July
29th Ramblin’ Man Fair.
Aaron Buchanan And The Cult Classics are
Vocals: Aaron Buchanan
Guitar: Laurie Buchanan
Guitar: Tom McCarthy
Bass: Chris Guyatt
Drums: Kev Hickman