A Night In The Struts 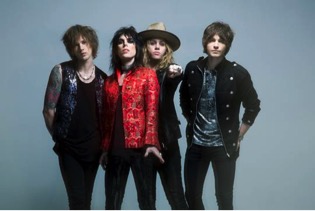 Huge in the US, the Struts are ready to conquer the world

British rock band The Struts – who have become one of the hottest rock bands in America – have announced that their debut album ‘Everybody Wants’ will be released globally on March 4th via Polydor/Interscope Records.

Featuring the huge US hit singles ‘Could Have Been Me’ and ‘Kiss This’ – which were on their US-only 2015 EP ‘Have You Heard’ – the new album was recorded in Los Angeles, London, Bournemouth and Jersey and embodies the sheer rock ‘n’ roll decadence which saw The Struts handpicked at the end of last year by legendary rock band Mötley Crüe to support them on their final four performances.

Of the new music, which was co-written by the band, frontman Luke Spiller says,“’Everybody Wants’ is a collection of songs for the disenchanted. When putting the album together we have approached it with the mindset that when listening, you are taken on a journey. You can even hear the album title in the chorus of the opening track ‘Roll Up.’ This song gives you the insight to a larger than life character that opens the door to the rest of the album. I think anyone who listens to this album will hear our journey and feel our ambition. We truly have put our hearts and souls into it and I hope you love it as much as we do.”

The Derby four-piece cracked the Top 5 at US Modern Rock radio, crashed the Top 10 in an array of Billboard charts, hit #1 on Spotify’s viral chart and received over 2.5 million Vevo/YouTube views with ‘Could Have Been Me’. The follow up ‘Kiss This’ has seen them play sell-out shows across America and perform on both Jimmy Kimmel Live and Late Night with Seth Meyers.

The Struts are a riotously exciting live band, full of vaudevillian onstage theatrics and peerless musicianship, who have built up a fervent British fanbase alongside their new-found American fame through non-stop touring. Last year saw the band ignite the NME/Radio 1 stage at Reading & Leeds Festival, and deliver a turbo-charged, sweat-drenched encounter at London’s intimate 100 Club, which sold out in just five minutes.