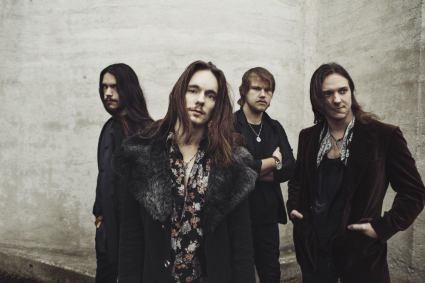 2016 will be clearly marked down in the history books as one of the most turbulent years the music scene has ever faced, but GREYBEARDS intend to end the year on a positive note, with the release of their massive, intelligent, and loud as hell new single.

Produced by Chips Kiesbye (The Hellacopters, Sator, Crucified Barbara, Bonafide) and aptly titled ‘Cold December’, the musical landscape on offer here will resonate with music fans who like their rock music modern, atmospheric, with an alternative vibe, and steroid infused pop licks.

With the lyrics reflecting on life’s hopes and dreams, setbacks and expectations, ‘Cold December’ takes a deep breath, remembering the iconic pioneers of music we have lost in recent times, and exhales with a heightened passion. This isn’t a group treading water, waiting for things to come their way… this is a band of brothers, who’ve quit their full-time careers, and are making things happen. “’Cold December’ is about a never-ending circle of trying to find happiness, while every mistake is biting your tail and forces you to run instead of just breathing”, says vocalist / guitarist, Ollie Westlund, “It’s a song in which our dynamic and emotional senses are driven to the breaking point, but where we really feel like we’ve found home.”

Hailing from Gävle in Sweden, Greybeards formed in 2012 with a simple mission statement, “to make the best music we can, and to tour the world.” With the four band members all just 22 years old, they’re living up to the hype that’s being bestowed on them. 2016 has seen the worldwide release of their debut album ‘Longing To Fly’, critically acclaimed reviews, and tours across the UK, Europe and China. Greybeards are already cementing themselves as a jaw-dropping live act.

A prelude to the band’s sophomore album (to be released in 2017, further news to follow), ‘Cold December’ is Greybeards best work to date, and is available to buy now via Attitude Recordings: http://phonofile.link/cold-december