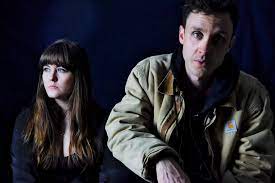 Underlying themes of parallel lives and duality reflect the band’s own origin. Singer-songwriters Annie Rew Shaw and Billy Wright were set on different paths and projects when they first met in 2017. However, after one session singing backing vocals at a friend’s studio, the pair decided to try writing together; completing their first two songs on the same day they met. The ease and fluidity of their shared work was too good to ignore, so after a year of sporadic sessions, they decided to cement their writing partnership and formed Dust In The Sunlight.

Dust In The Sunlight
have an exciting forecast ahead, with their upcoming second EP, new collaborative projects and live shows. Collectively, Dust In The Sunlight‘s debut releases have amounted to over 485k streams on Spotify and Apple Music and the band has successfully sold out a number of initial live shows, including their first headline slot in London.

Following their 2020 eponymous debut EP and subsequent remix releases by industry heavyweights The Big Pink and Mr Cutts (Stormzy, Empara Mi), ‘Blueprints’ marks the next chapter for the duo, with a richer sound and cemented confidence in both their writing and production.

The song is the first single to appear from Dust In The Sunlight‘s upcoming second EP, titled ‘Same World, Different Eyes’ – a body of work that they describe as ‘a much more collaborative project. The songs are about people; our complex relationships with ourselves and each other. It felt important to open up our songs and join forces with some amazing talent to enrich the sound. It’s much warmer, more expansive, and a really strong representation of our melting pot of musical influences and backgrounds’.

While self-producing a number of tracks on the EP, the duo have also teamed up with a stellar team of producers and engineers, including Ben Matravers (Easylife), Owen Cutts (Stormzy), and Tom Donovan (Monster Florence).