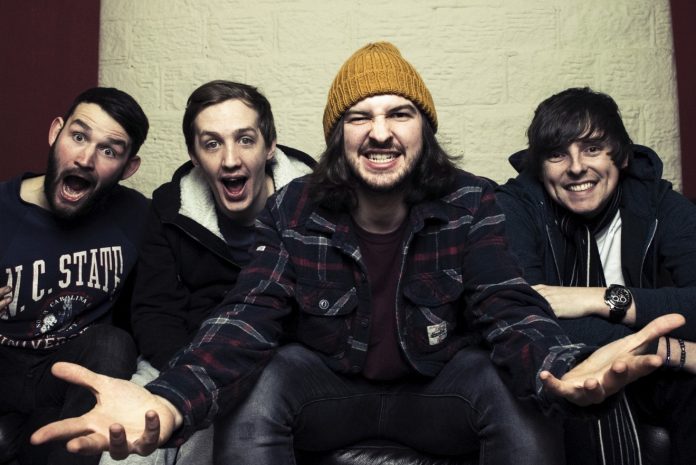 An eventful spell in the studio

Just as Landmarks band were wrapping up their time recording, disaster struck, as bassist Adam reveals: “The studio was broken into during the night. Twice. Much of the equipment was stolen, and the studio was brought to its knees.” It was this twisted turn of events that, in part, inspired the EP’s title, a middle finger to fate’s cruel hand; “That traumatic event solidified the phrase in our minds,” says Adam, “It’s subsequently come to work almost as a band motto for us. ‘In Spite Of It All’ sees Landmarks making a departure from their pop punk roots toward an alt-rock laced sound. Though still rich in melody, it’s an altogether more sombre affair, recalling the likes of Brand New in its downturned, more introspective aesthetic. Following the EP’s release on 12th August, vocalist/guitarist Brad gives us some insight into their time spent in the studio recording it…

When the time came to record a follow-up to our previous EP, ‘Fighting Gravity’, we were quite well prepared going into the studio. Following the departure of our original guitarist last summer, we brought in our newest member Nic Foley who took up lead guitar duties and together, we managed to write about 10 new songs in the same of a month or two! There was a lot of variation in the songs and some of them just didn’t fit the sound we were aiming to achieve for the EP, so with the help of our producer Matt Heap (who also worked on ‘Fighting Gravity’ with us) we whittled them down to just 5 that we thought best represented our sound.

Going back into Suff Studios with Matt was always something we talked about during the writing stages of the EP. Matt did great work on our previous record and really brought out the vocal harmonies between myself and Adam, he hears things differently to us so he was able to think up ideas that had never even crossed our minds! The fact that Matt is so well versed within the genre also helps because he not only knows how to make a great record, but also how a great record should sound in the scene during this day and age. In many ways, I view Matt as an unofficial 5th member of Landmarks because he really helps make the songs a completely finished product while you’re in the studio, and he’s always offering great input.

Due to the jobs each of us have and going in in December, we had to book several different sessions for the EP because when Christmas is round the corner, work aren’t too happy letting us bugger off. We began by tracking Tom’s drums which took just a little longer than a day. He knocked these out of the park and was so focused all the way through, he’s a perfectionist when it comes to recording his drums and some songs took a little longer than others but he flew through them pretty quickly and absolutely nailed them! Next came my guitar which I managed to complete over the course of 2 sessions. Matt prefers to record rhythm guitar before bass because he can then tell early on in the process if there’s any problems with the tone and make sure that it’s perfectly in tune when he does add bass – it get pretty cold in his studio at times so there were several tuning issues!

Having completed drums and rhythm guitar, it was time to track Adam’s bass – but it was at this point that the studio was broken into and robbed – twice! We were absolutely heartbroken when we arrived at the studio one morning and saw the door had been smashed in and equipment had been taken. Needless to say, we had to reschedule while Matt spoke with the police. It set us back a couple of weeks while the missing equipment was recovered and at one point we weren’t 100% sure that we’d be able to complete the EP. Luckily, Matt received a tip off as to who had broken in and when he visited the guys house with the police all the gear was recovered! Thankful, we pressed on and tracked Adam’s bass in half a day, making up for lost time in the process, before returning the following morning and adding Nic’s lead parts which he and Matt spent a long time finding the right tone for.

Our final sessions revolved around vocals. It took me about 2 days in total to record all of my parts and then we spent another day on Adam’s lines and all the harmonies that feature on the EP. Matt was hearing thing’s we’d never even considered while we were tracking vocals, so we kept returning to songs to add another harmony or backing vocals, and this provides the EP with a lot more depth and a glossier sound in my opinion.

With the recording process done and the horrible ordeal of the equipment being robbed out of the way, we had our first full listen to the EP few weeks later once Matt had finished mixing it. There were a few minor tweaks needed before we sent it to Bob Cooper to mastering, but we couldn’t believe how well everything came out! I think this record sounds even better than our previous one in terms of sound and quality, and I thought we might struggle to top that going in but our fears were laid to rest when the opening notes of ‘Translucent’ blasted through Matt’s speakers. I honestly couldn’t be prouder of how it turned out.”

Landmarks Released ‘In Spite Of It All’ via Scylla Records on 12th August 2016. Available at: