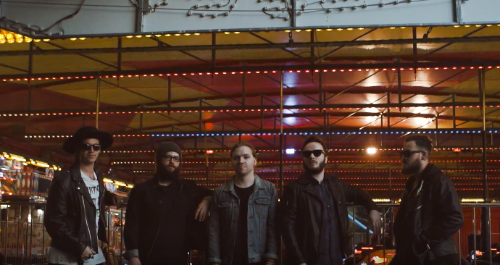 ‘Selfish Age’ is also the title track of their debut album, released earlier this year to rave reviews. The video includes footage captured on the road at Rock On The Range (US), Graspop (Belgium) and Nova Rock (Austria), featuring reflective shots of the band juxtaposed with rabid, clamouring crowds at their explosive live shows.

Combining blistering modern metal and swaggering melodic finesse As Lions create a sound full of poise and attitude. Comprised of vocalist Austin Dickinson, guitarist and keyboardist Conor O’Keefe, guitarist Will Homer, bassist Stefan Whiting and drummer Dave Fee, the five-piece stand by their mission statement to create “the biggest, baddest hard rock we can, on an almost cinematic scale.”

Having already had a Top 12 hit in the US Mainstream Rock Billboard chart with previous single ‘Aftermath’, As Lions will be supporting Nothing More throughout the USA and Canada in September and October, including an appearance at Sonic Boom Festival.

They will then be powering into a headline tour of the UK in November, supported by Greyhaven (see dates below). As one of the most exciting British rock acts on the planet, they are delighted to be able to announce a fantastic competition to find a local support act in each of the towns they play.

Entitled, the Nine Lives Competition, As Lions are seeking NINE fantastic new bands – one for each gig – to open proceedings for them.

In addition to getting the chance to share the stage with As Lions and Greyhaven, each of the winning bands will be supported across social media, YouTube and Spotify by As Lions, Raw Power Management and leading record company Eleven Seven – home to As Lions and the likes of Papa Roach, Mötley Crüe, Five Finger Death Punch, In Flames and more.

This will include featuring a single and video from each of the winning bands on the leading Louder Noise YouTube channel, which boasts over 1.3million viewers a month, including them on a specially curated Eleven Seven Spotify Playlist and giving full Twitter, Facebook and Instagram support in conjunction with the tour.

To enter, bands need to live and play locally to ONE of the venues listed below. They should email links to their latest music and videos, a brief band biog and their social media links to: aslionsband@gmail.com. Closing date is Sept 8th.