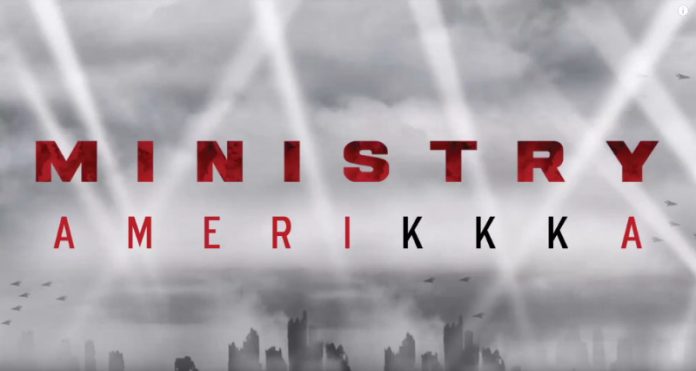 After several headlining tours of Europe and North America with the likes of CHELSEA WOLFE and DEATH GRIPS, MINISTRY will continue to support their critically acclaimed album AmeriKKKant with a full US tour this November / December. Joining the American industrial juggernaut are new wave of synthwave sensations CARPENTER BRUT. Today, the band has released a visualiser for the track‘AmeriKKKa’ in anticipation for that tour:

“So much great music has been inspired by MINISTRY – NINE INCH NAILS, MARILYN MANSON, ROB / WHITE ZOMBIE, KMFDM – RAMMSTEIN! Back full circle to MINISTRY’s own influences, like the reborn KILLING JOKE. But there’s still only one Al. No one really does this now except MINISTRY. Somehow, in spite of himself, the Hunter Thompson of Rock is still cranking out really good music and state of the art sound. Is it Trump? The world burning like Rome? I feel another trilogy coming on. This whole assault of an album really feels like it was made in a bunker, with you know who pacing all over his pillbox; half crazy to attack or be annihilated, just to get our whole Trumpamuck nightmare over with. Then what’s around the corner?” – Jello Biafra

Tickets on sale now via MinistryBand.com. Confirmed dates are as follows:

Produced by Al Jourgensen, recorded at Caribou Studios in Burbank, CA and with striking artwork created by Mister Sam Shearon, the psychedelic, politically influenced and very much in-your-faceAmeriKKKant’s nine tracks are rooted in Jourgensen’s unadulterated anger for what’s happening in America today: the waning respect for the US Constitution, the growing acceptance of one’s opinions replacing facts, the decline of our leaders’ sense of morals, ethics and personal responsibility to the country and to their constituents, and the mad man in the White House.

For decades, the powerhouse of psychotic sound that is MINISTRY has overcome millions with releases such as Filth Pig, The Mind Is A Terrible Thing To Taste, Psalm 69, From Beer To Eternity and a flood of others. Since the 80s, founder Al Jourgensen, has been combining elements of synth pop, punk, metal and even dub in a way that is instantly recognizable and has influenced many other bands.

With timeless classics such as Just One Fix, Thieves and Jesus Built My Hotrod, MINISTRY are one of a kind musical pioneers.

With six Grammy nominations to date, over 3 million records sold, more than 2,000 live performances, and movie soundtrack work on Hurt Locker, Artificial Intelligence, Matrix, Robo Cop and SAW, MINISTRY has been contributing to the music industry for over three decades.