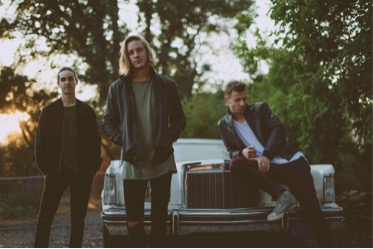 Canadian alt-rock outfit Bleeker have revealed their new single ‘Where’s Your Money’, taken from their critically acclaimed self-titled debut EP, which is being given a special 7” UK vinyl release on September 30th via Five Seven Music.
LISTEN TO ‘WHERE’S YOUR MONEY’ HERE

With cutting guitars, bouncing rhythms and vocalist Taylor Perkins’ exquisite falsetto-led chorus vocals, ‘Where’s Your Money’ comes on like a spectacular cross between Scissor Sisters and Queens Of The Stone Age and promises huge things for the Toronto natives.

‘Where’s Your Money’ follows the lead single, and EP title track, ‘Highway’ which cross-pollinates the swagger of The Black Keys with a psych-tinged groove and features a rock’n’roll, leather-clad, cars’n’girls video you can watch.

Completing the EP is the louche and punchy ‘Free’, which boasts a crunchingly heavy riff slap bang in its middle, the Seattle-style vibes of ‘Erase You’ and the beautiful melodies of ‘I’m Not Laughing Now’.

Get the self-titled EP on iTunes now

Bleeker will be hitting UK shores for the very first time in October as support to Royal Republic and Dinosaur Pile Up – a tour that will see Bleeker hit major cities including Manchester, Glasgow and a show in London at The Garage, Islington.

Their self-titled debut EP is now available across all digital retail and streaming platforms, and will be available on 7” vinyl on September 30th via Five Seven Music.