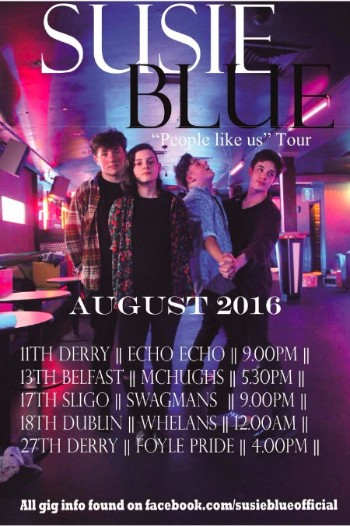 Derry rockers with a message
Derry four-piece Susie Blue have announced their new single ‘People Like Us’. A powerful indie-rock track it contains a strong message challenging intolerance and hatred in society, particularly in the form of homophobia.
Young, passionate and fuelled by their love of writing and performing music, Susie Blue consists of Susan Donaghy (lead vocals, rhythm guitar and synth) and three friends, John Goodman (drums), Caolan Moore (lead guitar) and Mark Doherty (bass).

The band has come together following Susan’s early solo releases under the name Susie Blue such as ‘Trust Me’ and ‘Guess The End’ which also dealt with issues of sexuality, love and hope.

Building up their fan base in Ireland, the band have been playing gigs around the country including appearances at Swell Festival and the Maritime Festival this summer and will be heading back out on the road for their first headline Irish Tour this month. Full dates are below.

After just a short time together Susie Blue are already showcasing their impressive song-writing capabilities and unique edge, with ‘People Like Us’ providing the perfect introduction to a wider audience for the young Irish quartet,