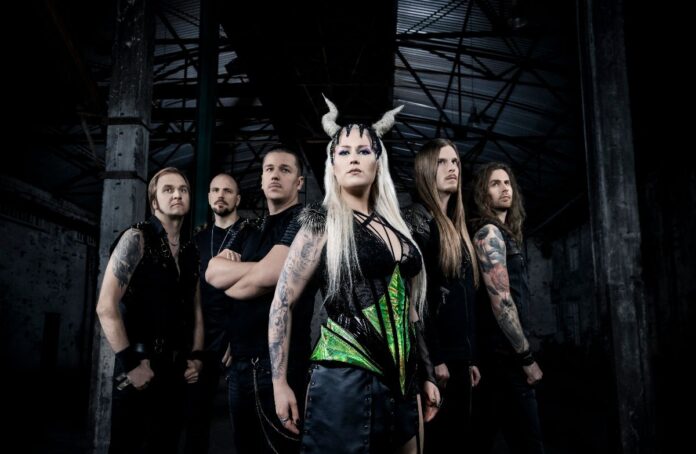 After re-signing to Nuclear Blast in early 2021, the Finnish heavy metal sextet Battle Beast are once again getting ready to unleash their force upon the world in the shape of their brand new masterpiece Circus of Doom. The album is set to be released on January 21st 2022 via Nuclear Blast and in true Battle Beast  fashion, the 10 tracks blend true heavy metal with pop and rock-vibes, paired with Noora Louhimo‘s unique voice.

Today, the band have revealed a music video for their second single, ‘Eye of the Storm’, that you can watch here: https://youtu.be/C7Z-IP2onYQ

Get the single digitally here: https://battlebeast.bfan.link/eye-of-the-storm

Guitarist Joona Björkroth comments on the single: “‘Eye of the Storm’ is a song about the one thing that keeps your boat floating when the storms of the world try to sink you. It’s an empowering and uplifting song that works best with the volume turned way up to 11, so make sure to crank it up!”

Pre-order Circus of Doom in the format of you choice here: https://bfan.link/circusofdoom
Watch the music video for first single, ‘Master of Illusion’, here: https://youtu.be/6sLSyTEXfCI

Recently, Battle Beast also announced their Circus of Doom European Tour, due to follow the album’s release in spring 2022. Starting in Paris on February 15th, the tour contains 19 shows all across Europe, including three shows in the UK, before concluding in Stockholm, Sweden on March 12th. Tickets are on sale now!

Since their 2011’s debut album Steel,Battle Beast have achieved over 200 million digital streams. Alongside the huge #1 success of their last three albums in the album charts of their home country, Finland, their last album No More Hollywood Endings (2019) also reached a remarkable #11 in German album charts.