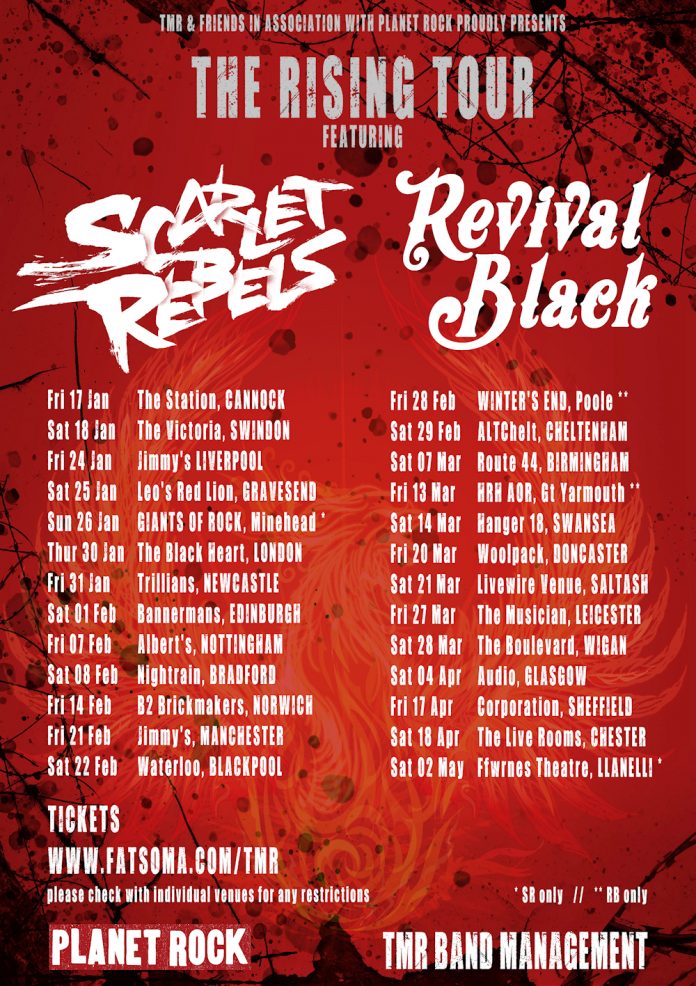 Two of the hottest bands on the UK’s emerging hard rock scene are teaming up together for an extensive tour across mainland UK, starting in Cannock on Fri 17 January running through to Sat 02 May in Llanelli. The tour will also include select festival appearances at Giants Of Rock, Winter’s End & HRH AOR.

* Scarlet Rebels only
** Revival Black only

Tickets are on sale now: https://fatsoma.com/tmr

Both bands are on a high off the back of critically acclaimed albums.
Scarlet Rebels released Show Your Colours in August on ROAR – Rock Of Angels Records
While Revival Black release their debut album Step In Line on Fri 11 Oct after a string of well-received singles.

Wayne Doyle of Scarlet Rebels said, “We’ve been opening for bands all over the place for a few years now, doing a few headline shows along the way. We’ve been wary about taking the plunge of doing a headline tour off our own backs, but when we were asked if we’d be interested in co-headlining with Revival Black, it was a no brainer, they’re a fantastic band, a great bunch of lads and their album is absolutely brilliant.

To see the interest it’s garnered, watching the dates flock in and with Planet Rock on board as well, it’s going to be absolutely epic. We’re massively proud and humbled to be on board and hugely excited to be taking the ‘Show Your Colours’ album on the road. Bring it on!”

Ash Janes of Revival Black added, “The past six months have been absolutely insane for us. We’ve had some incredible opportunities and played with some amazing artists, but nothing has excited us as much as hitting the road and co-headlining with a band we’re all huge fans of and in support of our debut album ‘Step In Line’.

We crossed paths with Scarlet Rebels earlier this year and knew instantly that we’d be a perfect fit to take to the road with. The excitement from the fans has already been overwhelming and with the support of Planet Rock behind us, on such an extensive tour, the UK really won’t know what hit it. We’re bringing our “A” game and taking the Step In Line live show right across the country. We really couldn’t be prouder, it’s going to be huge.”