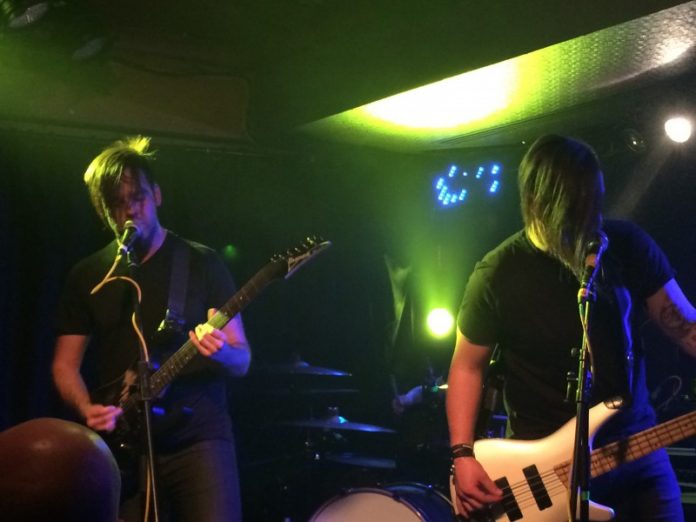 The Devil In Faust are, as they put it, from “the Shires of the Midlands” but the Shropshire/Lincolnshire trio have ideas beyond that. “Seed” is dark and stark, “Finders Keepers” features a fine chorus built around harmonic interplay from singer/guitarist Al and bass player Perret and a catchy hook or three. The single “So Clever” appears intent on breathing new life into grunge, and succeeds too, and screeching closer “Skin” – complete with light box effects no less – showcases a band who, with a little more experience and confidence to go with the talent they clearly have for writing anthemic stuff in a similar vein to the likes of Zico Chain, could be ones to watch.

Midlanders Out Of Luck are a rather more clenched fist proposition. A kind of twin guitar heavy metal attack that walks some kind of imaginary line between (early) Iron Maiden and (early) Motley Crue, the likes of “Say What You Want” proudly make the early 1980s their home. Frontman Tommo tops it off with an energetic display as “Funk” adds a groovier side, as Brad on drums treats his kit like it owes him money. Their ebullient cover of Priest’s “Breaking The Law” is a natural fit for the five piece, and by now in their stride, “Dr Alibi” is a fist pumper. “I Will Be Free” meanwhile, would quite like it to be Saturday night and sod the hangover tomorrow. Much like the band. They probably won’t like Monday, but they had a good time here.

London three piece Dead Dollar Days are touring with tonight’s headliners for the next week and are just glad to be out of the capital: “beer is much cheaper here” offers singer Bo Hawkins. Regional liquor prices aside, their sound is designed to win new fans where lever they go mind you. “Becky” for example, echoes Biffy at their most raw and the single “Dead Man’s Prayer” swaggers in like it’s got business to attend to and does so on the back of a riff like Josh Homme used to write. Elsewhere they do the a neat line in tight, taut Therapy? rhythms and if the news that bass man Laurence Riis is on hung like a mule means we are a little envious, then nothing can disguise the power of his contribution to “Cruel To Be Kind” which rather shakes down to its boots and “Daredevil” does something mighty. Expect to see more of these triple D’s.

Although South East based, 48 Hours have been reasonably frequent visitors to the second city over the last year or so. This particular jaunt, though, is a little bit more significant than the others. Just a couple of days ago the three piece released record number two in the shape of the brilliant “Expectations” and this is their first chance to share the songs live, and it’s a opportunity they take with glee.

They might start with “Hollow” from the debut album, but everything else is from “Expectations”, a collection which the band are evidently – and rightly – proud of. Which means that the short, sharp set is full of short, sharp songs.

Highlights include “Martyr”, the thunderously good “Liars” and “Best Mistake”. These are tracks that are designed with arenas in mind. Ok, it’s a wet Sunday night and the crowd here isn’t huge, but the intentions are clear and the passion with which singer Adam Jerome and bass player Gary Broughton deliver their work is there for all to see. When you add in Drummer Matt Savini to the mix, you have a pretty potent brew.

The suspicion is that the band are absolutely one of the best underground bands in the UK and nights like tonight only add to that belief. As they close this evening with the “Forget” and the new album’s title track, then you can only hope their hard work will pay off. 48 Hours are a band that deserves to get where they want to go. There’s certainly nothing here today and gone tomorrow about them.

Previous article
Killer In The Name Of
Next article
Featured Band: Bridgeville