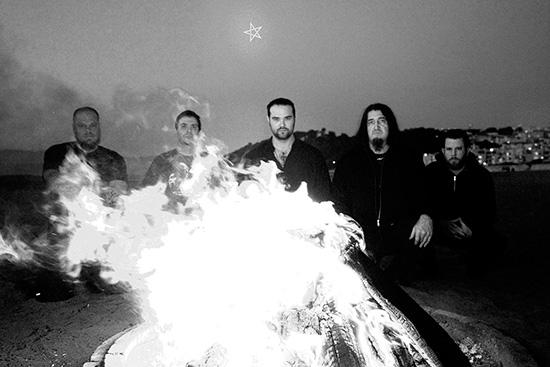 Secrets of the Sky signs to Metal Blade Records

Oakland, CA natives, Secrets of the Sky, have signed with Metal Blade Records and will be releasing their sophomore album in the summer of 2015! The psychedelic, doom act released “To Sail Black Waters” through Kolony Records in late 2013. The album was incredibly well received and Decibel Magazine declared that it “overflows with that rare quality of sounding familiar while remaining wholly unique…Do not miss this.” Popular blog Metal Injection took describing the band’s sound to task and said “imagine if you tossed Neurosis, more recent Immortal, and Porcupine Tree into a blender…it’s an awesome fucked up mix“.

After touring in support of “To Sail Black Waters” over the past two years, Secrets of the Sky are prepared to take their next step. They’ve completed tracking their sophomore album at Trident Studios with producer/engineer Juan Urteaga (Testament, Machine Head, Cattle Decapitation). Details and new music will be released this summer.

Secrets of the Sky comments on joining forces with Metal Blade Records: “We are very excited to be joining the Metal Blade Records roster. The Metal Blade legacy, reputation and commitment to heavy music has stood the test of time. The staff we have been working with genuinely “get” what it is that our band is doing and have been tremendously supportive of it thus far. We are also pleased to announce that our second full length will be released in the coming months. The album was again recorded by Juan Urteaga at Trident Studios and is another abstract concept piece. We believe we pushed ourselves in writing it to further develop our sound and we put more focus on creating a collection of songs that flow from beginning to end, while still retaining the cinematic qualities we originally set out with on our debut.”