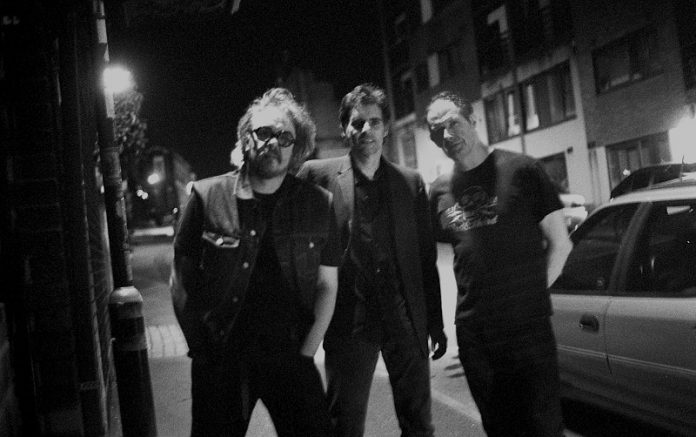 May 4, 2016
Reading time: 3 min.
Facebook
Twitter
Pinterest
WhatsApp
Linkedin
Email
Print
Telegram
Copy URL
By Andy Thorley
Brummies release new one ahead of album
Birmingham garage-rock trio BLACK BOMBERS announce the release of their long-awaited debut album with a brand new video for the track ‘Break It Down’.
The video for ‘Break It Down’ was produced and directed by Poppy Twist of fellow Birmingham bands TABLE SCRAPS and POPPY & THE JEZEBELS.
Watch it here:
The self-titled album, which is to be released through Easy Action Records on Friday 27 May, was recorded as close to live as possible in the band’s rehearsal space, and co-produced by their live sound engineer, Paul Gray.
The band comment: “We wanted the actual sound of Fender Guitars and Rogers Drums and an over-driven vocal PA – without those sounds being sanitised through the prism of studio technology. We set up in a disused factory space and Paul Gray made a rather expert field recording as we let rip over the course of a weekend. The result was, as we’d kinda hoped all along, reminiscent of the kind of primal, no budget, proto-gunk that had emanated from Pathway or Escape studios in those blissful years before the rise of the click-track.”
Black Bombers are the latest tier in England’s second city’s towering rock and punk history. Having served time in and amongst Birmingham’s original ’77 punks THE PREFECTS and sleaze-rockers GUNFIRE DANCE, their impressive family tree also has branches in such legendary names as SWELL MAPS, THE DAMNED and JOHNNY THUNDERS & THE HEARTBREAKERS.
Black Bombers have two forthcoming dates…..
Fri 27 May      Nambucca, London (album launch show w/Eight Rounds Rapid)
Tickets http://www.wegottickets.com/event/357151
Album pre-order link: http://easyaction.co.uk/index.php?route=product/product&product_id=424
Facebook:  https://www.facebook.com/BlackBombers150
Previous article
In With The Arc
Next article
Know Your Enemies