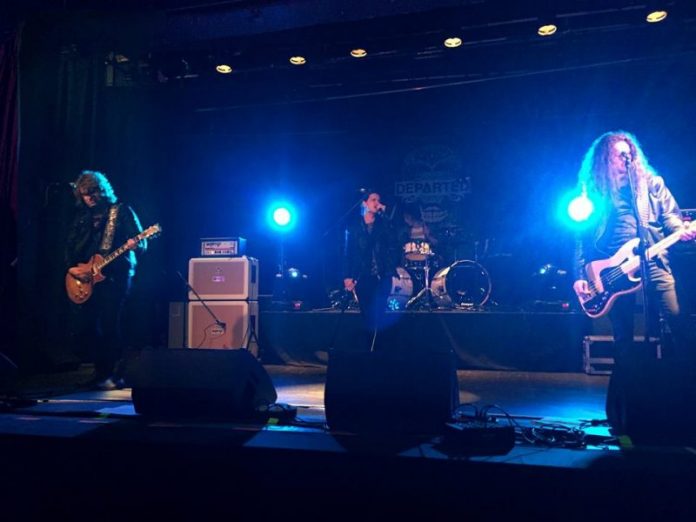 Former The Treatment man is back with new crew

Steal Your Crown’ is the debut single by Southwest, UK rock band DEPARTED

Their debut EP “DEPARTED” is set for Digital release date – June 18th. Pre-sale May 18th.
The EP consists of 7 exciting new tracks featuring – Ben Brookland the former lead guitarist for the young UK rock band The Treatment who has become one of the most respected and exciting young players on the scene in years. He has recorded two hit albums with The Treatment and toured the world supporting such rock legends as Slash, KISS,
Motley Crüe , Status Quo ,Thin Lizzy, Steel Panther, Alice Cooper and many more!

The Treatment received critical acclaim and were nominated as “Best newcomer” at the Classic Rock awards. Also
Ben is an Orange amps endorsee and is constantly flying the flag for young British rock talent.
Mark Pascall, Lead singer for the band Empire of Fools (www.empireoffools.co.uk) who have
received critical acclaim over the past couple of years from some of the top publications in the
business.

Mark has been featured in publications such as Bass Guitar magazine as well as writing
“Devil inside” which featured as a Classic Rock Magazines “Track of the week”, plus being included on their covermount CD. EofF has had vast worldwide airplay including stations such as Planet Rock Radio and the BBC. Mark has supporting the likes of Reef, The Darkness, The Answer, Status Quo and having played at prestigious venues such as the CIA as well as many of the countries top festivals. Mark is an Orange amps endorsee.

Whilst DEPARTED have a permanent drummer the EP also features special guest Chris Rivers on drums. Chris is
known for his energetic style and hails from one of the UK’s hottest bands Heaven’s Basement and previously Roadstar.