Metal For The Masses 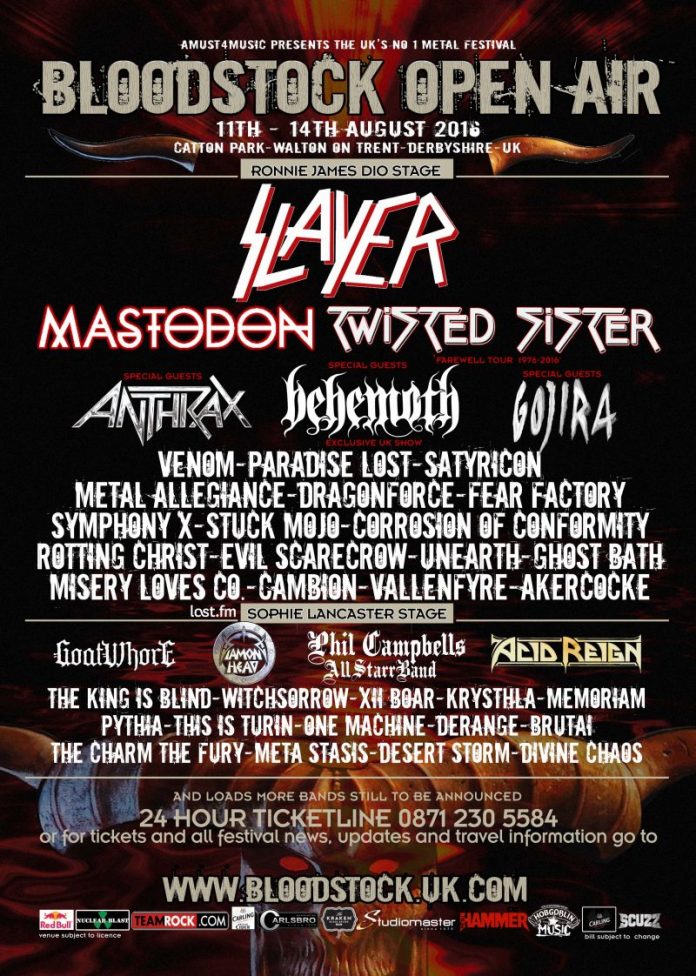 BLOODSTOCK HQ is readying to send Team M2TM out on the road for the finals,but in the meantime, there’s a few more band additions to the August bill!

Joining Friday’s main stage bill are newly re-grouped British death metal overlords, AKERCOCKE. The band are working on new music and BLOODSTOCK will be their very first gig since their reformation. Frontman Jason
Mendonca tells us: “AKERCOCKE have returned after 5 years absence from the live circuit. We are reinvigorated by the return of our original guitarist Paul Scanlan and the ranks are completed by Dam front man Nathanael Underwood on bass guitar. Following the great experience the band enjoyed
in 2008, we are proud to return to the BLOODSTOCK main stage for a second time. Expect fan favourites from the past and killer new tunes from the present. See you down the front.”
Stoner/blues rock five-piece, DESERT STORM join Sunday’s Sophie stage bill. Check out their video for ‘Signals From Beyond’ The track can be snapped up on various coloured vinyl as a split 7” (with Suns of Thunder) on 29th April from http://www.h42records.8merch.com/presale.

Also landing a Sunday Sophie slot are thrash metal animals, DIVINE CHAOS.
Check out their video for ‘Fields of the Fallen’ –
https://youtu.be/wJn8qWmDt8A – and pre-order their debut album, ‘A New Dawn
In The Age Of War’ over at their webstore for a 29th May release –
http://www.divinechaosmetal.com/#!reviews/c9qb.

Meanwhile, back at BLOODSTOCK HQ, the first acts for the New Blood stage have been chosen! After throwing their hat in the ring via CD applications, the following bands win slots on the New Blood bill; London
doomsters POSEIDON, Bristol’s darkly melodic MORDRAKE, Belfast metal beasts RABID BITCH OF THE NORTH and Austria’s REST IN FEAR all snare themselves stage time at BLOODSTOCK!

BLOODSTOCK’s ‘Metal 2 The Masses’ judging squad are also ready to hit the road, as the M2TM finals get under way soon! The local heats have been oversubscribed with entries and many playing to packed houses countrywide,
so anticipation is already running at fever pitch. Get along to your local event and support grass-roots metal! Not only will be a fun night out, there’s a chance at each event to win weekend tickets to BLOODSTOCK, a case
of Hobgoblin Ale to take home, or various other BLOODSTOCK related prizes.

You can even shake hands with BLOODSTOCK’s ‘M2TM’ mainman, Simon Hall. Finals run as follows:

There’s still time to enter your band via the third method to win a spot on
the New Blood stage. You have until 8th July to upload your band’s video
to Hobgoblin’s Video Upload site. An outright winner lands a slot at
BLOODSTOCK, but a selection of runners up will win airplay for their band’s
video on Scuzz TV!! Get all the details here –
www.bloodstock.uk.com/pages/hobgoblin.

BLOODSTOCK will be held at Catton Park, Derbyshire on 11th-14th August
2016. Keep up to date with the very latest info on BLOODSTOCK’s official
sites at www.facebook.com/bloodstock and www.bloodstock.uk.com, or via
Twitter on @BLOODSTOCKFEST.