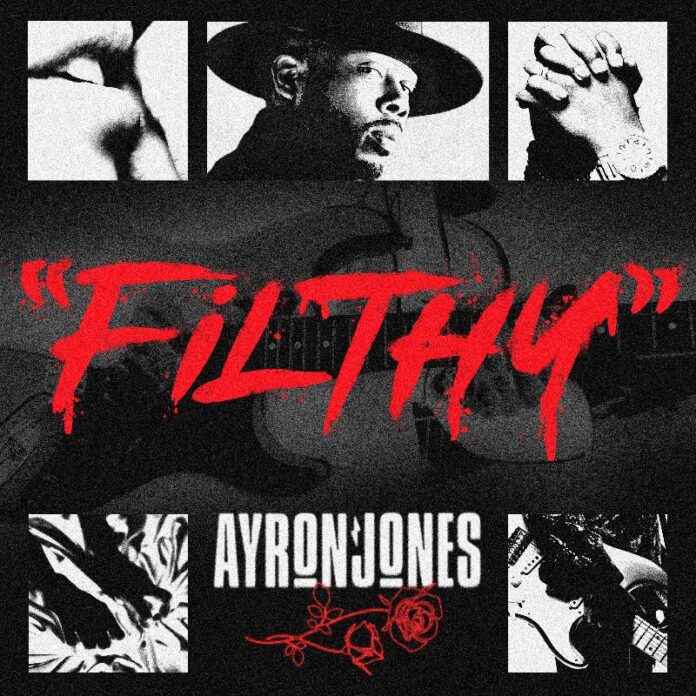 Ayron co-wrote ‘Filthy’ alongside Marti Frederikson (Ozzy Osbourne, Carrie Underwood) and Scott Stevens (Shinedown, Halestorm). On the track, heavy breathing gives way to a thick guitar riff punctuated by bluesy bends as Jones embraces a seductively primal croon weaving together suggestive verses before a proclamation on the hook, “In my town, they don’t call me dope, they call me filthy.”

Between these fits of vocal ecstasy, he leans into the groove and churns out a fret-burning lead topped off with a funky gallop. Jones puts it best, “Turn this mother up and get loud if you’re filthy.”

“Where I’m from the word ‘Filthy’ is used as the highest compliment in the land. It means that you are so good at what you do and who you are that it should be a sin,” shared Jones. “That’s what was on my mind when I began working on this song. I wanted to celebrate counterculture and promote pride in what means to be considered ‘different.'”

One of America’s hottest breakout artists of 2021, Ayron achieved massive success with his US Top 5 debut single ‘Take Me Away‘ laying a foundation for multi-week No. 1 single ‘Mercy‘ and the Top 5 hit ‘Supercharged‘, all taken from his critically-acclaimed album CHILD OF THE STATE. The 2022 iHeartRadio Music Awards Best New Rock Artist nominee was deemed by American Songwriter as not only “one of the biggest up-and-coming names in rock music” but also “one of the biggest names in the genre.”

In the UK Ayron has wowed fans with headline shows and this summer blew away a huge audience opening the Download Festival. He’s also had huge amounts of critical acclaim with Classic Rock naming CHILD OF THE STATE one of their Albums of 2021.

Following select European headline dates this summer, Jones is slated to return in November for a run of shows in the UK and France.

For a full list of tour dates and more, visit AyronJonesMusic.com.