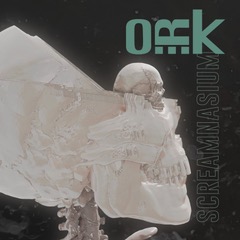 The expansive and emotive, Screamnasium is O.R.k’s most essential album to date. Spontaneous yet intricately crafted, and perhaps the most concise statement of the band’s sonic aims yet.

With the quartet having formed a strong creative bond over the course of three previous studio albums and with countless miles clocked up on tour, the highly anticipated follow up to 2019’s acclaimed Ramagehead has finally arrived. The pent up, derailed energies of O.R.k. have found a release with their gutsy, cathartic and striking new album Screamnasium.

Setting the pace, lead single/album opener As I Leave delivers a distilled form of the O.R.k. spirit directly to the listener. Lef’s powerful vocals, Carmelo Pipitone’s energetic riffing, Pat Mastelotto’s inventive rhythmic accompaniment and Colin Edwin’s distinctive bass tones all infuse Screamnasium with a refreshed intensity and a new luminosity. Energy levels are maintained throughout the 42-minute runtime as O.R.k. state the case for optimism, tolerance and empathy – these are hopeful anthems for an increasingly uncertain world.

One particular highlight is “Consequence”, where Lef spars with Grammy winning vocal phenom Elisa, best known outside her native Italy for her collaboration with the legendary Ennio Morricone on Quentin Tarantino‘s Django Unchained soundtrack.

Colin Edwin comments “Right now, Screamnasium feels to me like the album we’ve been trying to make since we first conceived the band, both sonically and also in terms of the songwriting and subject matter. All four of us are playing to our natural strengths and we’ve managed to express both light and shade and all sorts of colours in between. It reflects our recent pasts and directs some energy towards a more hopeful future. For me, the album is kind of a depurative, I really hope that overall feeling comes across.”

The creative duo of Grammy winning art director Adam Jones (of Tool) and Marvel/DC Comics illustrator Denis Rodier have handled the artwork and layout to create an iconic album artwork with remarkable visual imagery, while mixing and mastering duties have been undertaken by Machine (Lamb of God, King Crimson, Clutch).

Encompassing a wide breadth of emotional landscapes, Screamnasium is the consummate relief for our troubled times.