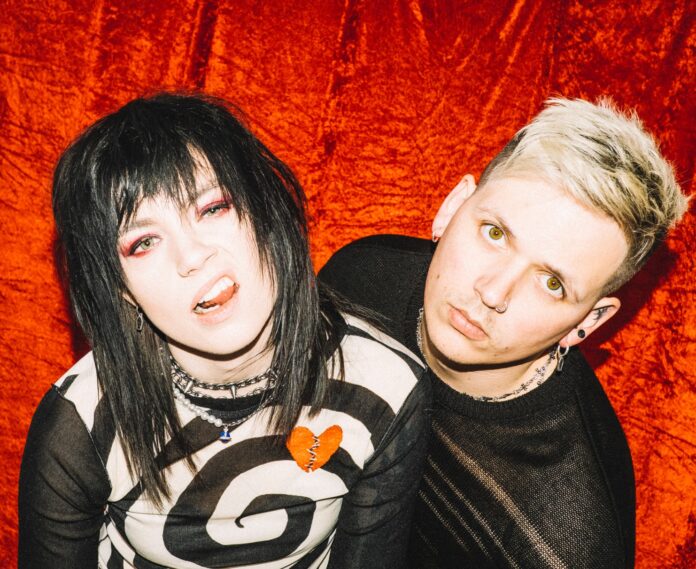 “This record is a reflection of our alter egos, it’s emotional, it’s a story, its fuckin real man.  Every single song reflects a different moment that we’ve needed to get through and being able to put that truth into a song that we get all scream together has meant healing for both of us. We have played with fire a lot in our lives, lived to excess, done some stupid shit… we still do stupid shit but for a while we were living so dangerously, that our lives nearly went up in flames… the King and Queen of nearly fucking it all up… the King and Queen of it all being doused in bloody gasoline… but not yet on fire. This record has been written across the world and finally finished and produced in a bedroom in Salford by us, this whole record is the definition of champagne lifestyle, lemonade budget.” says the band

The title track video is also released today, an anthem for “the self-destructive black sheep of the family.”

Watch HERE or below

The band recently took the US by storm on the Sad Summer fest tour & Lollapalooza fest.  The band return to home shores this week before heading to Pukkelpop and then onto Australia for dates with State Champs in the Autumn.  They will then join Blackbear for the UK/EU shows in the Autumn.

Hot Milk also performed on the massive TV show Jimmy Kimmel Live, cementing their position as one of the UK’s most exciting bands.

Telling a story of tearaways, delinquents and being the King & Queen of their own dark underworld, fighting the patriarchy.  Hot Milk deliver that infectious rage that can only come from being the outcasts and now are taking back control to create a movement of their own with forthcoming EP “The King And Queen Of Gasoline” – produced by Hot Milk isout now on Music For Nations.

The six track EP follows on from 2019’s ” Are You Feeling Alive?’ and 2021’s “I JUST WANNA KNOW THAT HAPPENS WHEN I’M DEAD” which not only garnered 30 million streams, it propelled them into the spotlight with both critical acclaim and winning tours with the Foo Fighters, The Band Camino, Pale Waves and more.

“The King And Queen Of Gasoline ” EP creates a storyline of overcoming resistance from control, whether its parental or relationships that have evoked feelings of being stifled and judged.  These themes are threaded within the music which has become a lifeline to the band.

“We wanted to personify this feeling of oppression and give it a face, the bunny cult you’ll see visually throughout the record gives us something to rage at.”  says Jim Shaw.

“The record has come straight from our veins, written and produced by us in a bedroom in Salford” says Han Mee.  “This has been a labour of love, almost hate and therapy all in one.  Through this record we want to create n intentional space where liberation and the ability to be free of expectation can be lived. We are the King and Queen Of Gasoline.  The best at nearly ruining it all, fucking up and everything nearly going up in flames.

The King And Queen Of Gasoline EP Tracklisting

The King And Queen Of Gasoline
Teenage Runaways
Fell In Love With Someone That I Shouldn’t Have
Bad Influence
The Secret To Saying Goodbye
Chloroform/NightmaresThe King and Queen of Gasoline comes on CD, white opaque vinyl, and a limited edition translucent red vinyl available exclusively through the band’s store.

The King And Queen Of Gasoline is out now- HERE