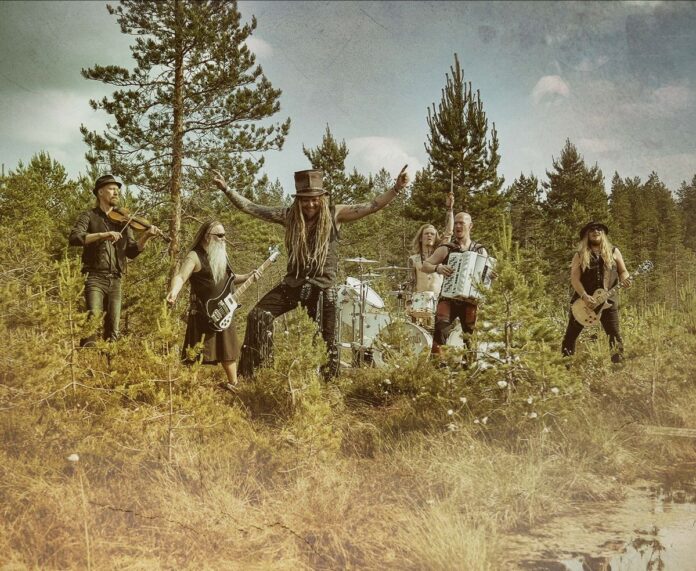 Finnish folk metal superstars Korpiklaani have released a lyric video for ‘Interrogativa Cantilena‘ – an English version of the song ‘Pidot‘ from their acclaimed most recent album ‘Jylhä‘, which was hailed by critics and fans alike as the most elaborate and mature Korpiklaani album to date. ‘Interrogativa Cantilena‘ features guest vocals from none other than Kevin Ridley (Skyclad). You can watch the video below.

Jonne (Korpiklaani) comments:
“Our last adventure before Covid was our Japan tour, where we shared the stage with the Original Folk Metal legends, Skyclad. Kevin and I bonded and worked on various projects since then, so it came naturally to ask him to give us lyrics. We sent him the Jylhä record and simply said, you chose which song and you write what you want. So he did. In fact his demo is probably better than this version! Nevertheless, we are extremely happy with how this came out in the end. We hope you enjoy this as much as we do.“

Kevin Ridley (Skyclad) adds:
“‘Interrogativa Cantilena’ is actually the third collaboration I have done with Jonne over the last year. It all started when I asked him if he would contribute to the Theigns & Thralls track ‘Drinking’. Shortly after that, he was working with Kartsy on Waltari’s anniversary album, and they asked me to add some vocals to the song ‘So Fine’. Coincidently, during this period, I had been doing some research into old poems that were written anonymously and I had come across the words for ‘Interrogativa Cantilena’, and I immediately thought they would work in a song. Then, serendipitously, I was asked if I would like to rework a track from the latest Korpiklaani album ‘Jylha’, using English words. So, I listened through and found that, with a bit of rearranging, that the words fit perfectly to the song ‘Pidot’.”