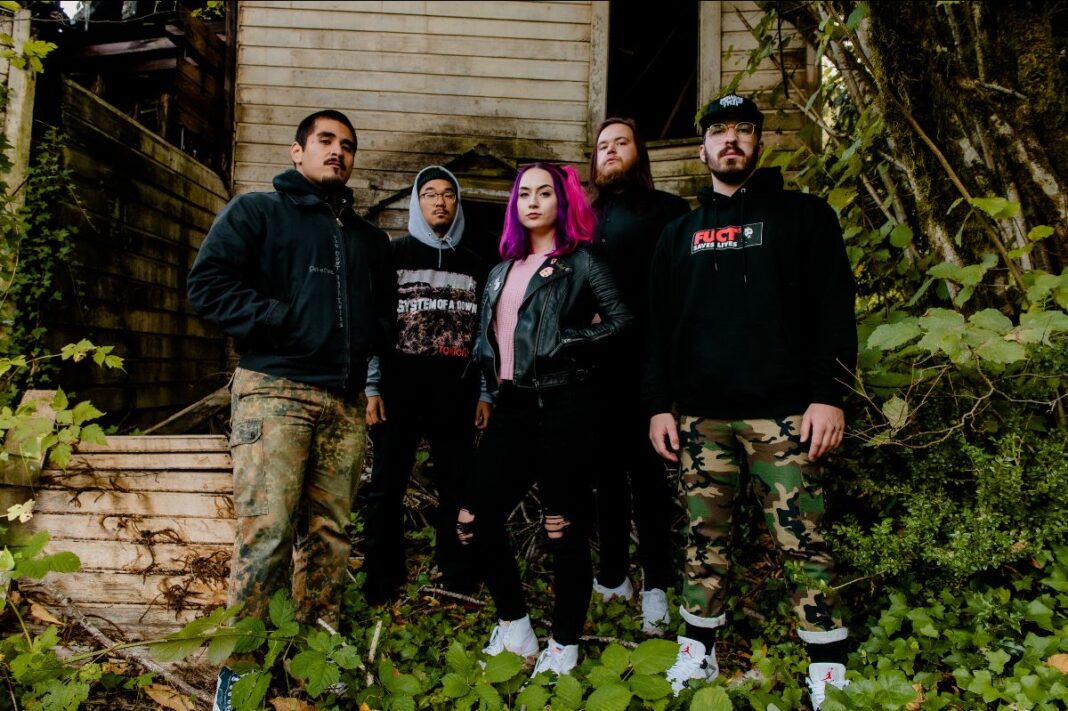 In less than three years after their formation, Portland-based blistering hardcore five-piece Dying Wish have built up a reputation as one of the leading bands in their scene and today, they have finally unveiled their debut full-length album. Produced, mixed, and mastered by Randy LeBoeuf (The Acacia Strain, Kublai Khan, Sentinels), Fragments of a Bitter Memory is 11 songs of savage, pummeling assault against trauma and society.

“We had never worked in a setting like that, where we’re all kind of living at the studio for weeks, making an album,” bassist Andrew Le says of the recording process. “We came into our own as a band.”

The results are focused, explosive, and powerful. The album opens with “Cowards Feed, Cowards Bleed,” a visceral barnstormer expressing the exasperated feeling of being fed up. Today, fans can watch the music video for the new track here.

“The first line in cowards feed, cowards bleed ‘your demons don’t lie and neither do mine’ sets the tone for the message of the song,” shares guitarist Pedro Carrillo. “When I wrote It I was in a headspace of pure anger towards anyone and everything. I wanted to showcase that every person has a limit to the amount of shit they can take everyday. Once someone’s pushed to their limit they will ultimately act out in a violent fashion. So, the lines in the song are made to promote violence and to not be remorseful for it. You’ve pushed me too far and all I see is red now type of feeling. I’ve become the villain and I’m not going to stop until you’re gone. All of this coincided with the music video perfectly because we incorporated the red aspect with the blood rain falling on us. It is a nod to feeling pure rage toward the circumstances you’re in. Us in white outfits in the beginning and then turning them completely red at the last half of the song is reminiscent of someone flipping the switch in their brain where they go ‘that’s it, I’m not taking this anymore. Fuck you.’ We all are capable of becoming the villain.”

“Hollowed by Affliction” follows, plainspokenly addressing mental health issues and thoughts of self-harm. “Innate Thirst” confronts those who use other people’s trauma and collective pain for profit or popularity. “Severing the Senses” is a song for abuse survivors, and the title track mines similar territory. Vocalist Emma Boster lays bare the long-term effects of a childhood spent in an abusive household.

The blistering hardcore band’s passionate music fuses the New Wave of American Heavy Metal with chaotic punk dissonance. The diverse and committed group forged a musical and activist identity in the DIY scene. Even as they’ve graduated to bigger tours with bands like Motionless In White and The Acacia Strain, they continue to uphold those ethics, espousing the values of equality, justice, and self-determination.

Dying Wish “do metalcore in a way that’s darker and more menacing than a lot of their peers,” and yet, “could be the biggest band in the world when they let their [more melodic] side shine through,” as Brooklyn Vegan observed. They align with the continuing battle for liberation, encompassing the issues affecting BIPOC, the environment, and more intersectional causes while dealing in personal struggle and trauma in equal measure. They make music aimed at unity but without compromise. Revolution and liberation, in spirit and song, is the heart of Dying Wish.

Fragments of a Bitter Memory is available to stream and purchase today via Sharptone Records here: https://shrptn.co/foabm