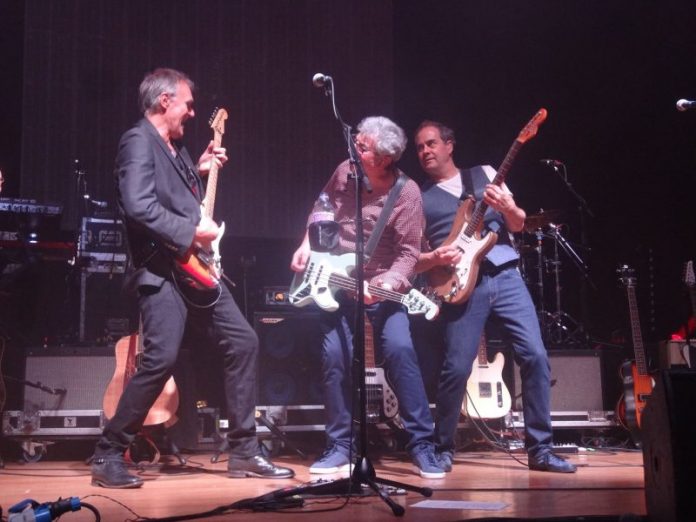 Garry is present at a masterclass

Some bands write a few good songs throughout their career and then you have the Graham Gouldman fronted 10cc who basically redecorated the wonderful Symphony Hall in Birmingham last night with a glorious wall to wall covering of classics in a songwriting & musicianship masterclass…..this review may well make you feel rather envious if you weren’t lucky enough to be there.
When a band can open their set with ‘Wall Street Shuffle’, ‘Art For Arts Sake’, ‘Life Is A Minestrone’, ‘The Dean And I’ & ‘Good Morning Judge’…..you know you are in for some rather special, but this wasn’t just a greatest hits setlist…..the band had decided to delve back into the archives for a few long forgotten gems such as ‘Clockwork Creep’ & ‘Old Wild Men’ which sadly sends a few ‘Best Of….’ punters heading to the toilet or to the bar…..just because you don’t recognise it doesn’t make it any less deserving of your attention!!!!
My personal highlight of the night was the full 12 minute version of ‘Feel The Benefit’ from the album ‘Deceptive Bends’……utterly majestic in every way, I’d only seen this song performed live once before and for me they could play it on every tour…..but I must say I do have a penchant for a lengthy track or two.
Further classics followed such as ‘The Things We Do For Love’ and ‘Silly Love’, before the songs ‘Somewhere In Hollywood’ which featured a video cameo from Kevin Godley and the wonderfully bizarre ‘Baron Samedi’……adding these obscure album tracks to the setlist were a real treat I must say…..the triple header of 70s chart belters ‘I’m Mandy Fly Me’, ‘I’m Not In Love’ & ‘Dreadlock Holiday’ brought this incredible main set to a close with the final line….’I don’t love Birmingham…..We Love It!!!!’
The band returned with ‘Ready To Go Home’ which none of us in the packed auditorium were ready to do just yet before we were treated to the acapella version of ‘Donna’…..I’m still not totally sure how Mick Wilson hit those high notes, and then it was time for the rebel rousing rendition of ‘Rubber Bullets’…..which had everyone up on their feet singing along, it’s a great song in what was a setlist packed with great songs…..it was a privilege to witness such a performance from an utterly wonderful band yet again.
My final words in this review is simply a ‘Hats Off’ to such a fantastic collection of musicians in Rick Fenn, Mick Wilson, Paul Burgess, Keith Hayman and bandleader Graham Gouldman…..it would be so easy for such an established band to go through the motions and just wheel out the hits but that’s not what 10cc do…..they deliver on so many levels and perform with such enthusiasm that the fun the band clearly have on stage rubs off on the packed crowds they are playing to on this current tour, it has to be said that last night 10cc gig raised the bar in the words of Nigel Tuffnell right the way to ‘Eleven’
Garry Foster
Unchained: Tuesday’s 10pm-Midnight
Prog Rock Files: Thursday’s 10pm-Midnight
101.8WCR FM & online at http://www.wcrfm.com