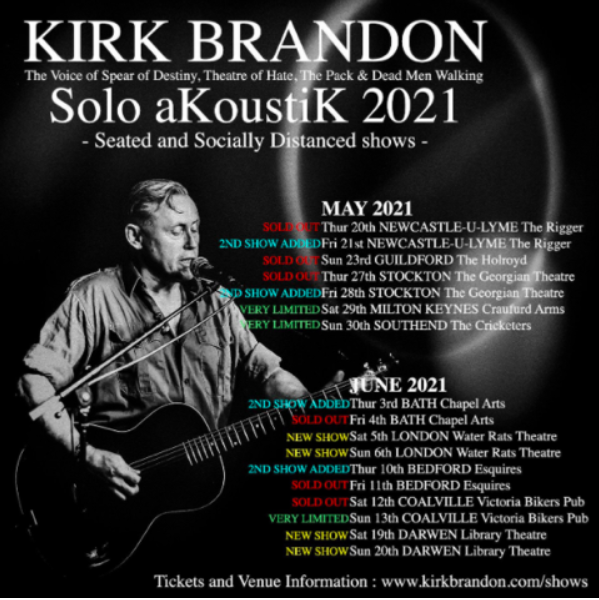 KIRK BRANDON has confirmed his 2021 solo ‘aKoustiK’ tour. The 17 date tour will run from 20th May to the 20th June, and includes stops in London, Newcastle and Bath + new dates added due to high demand.  See below for dates.

Kirk Brandon is the voice of Spear of Destiny, Theatre of Hate and Dead Men Walking. With over 15 studio albums and countless single releases, his career now spans well over 30 years. He has enjoyed worldwide success with all three of the above bands and is also a leader in every punk rock poll by being the singer and songwriter in The Pack.

Over the last 11 years, Kirk has released five solo acoustic studio albums (the “Dutch Masters” series) that have pulled tracks from all era’s of his career, these albums have also featured many of the people Kirk has worked with and collaborated with over the years including Derek Forbes (Simple Minds), Slim Jim Phantom (Stray Cats), Mike Peters (The Alarm) & Clint Boon (Inspiral Carpets).

With some shows already sold out and new dates added due to high demand, expect some brilliant live performances from Kirk Brandon.