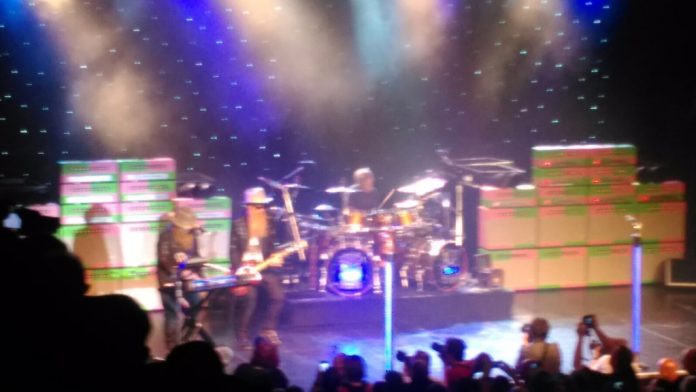 Last time MVM saw Ben Miller Band they were opening for ZZ Top at Hammersmith Apollo a couple of years back. The story went that Billy Gibbons had seen them in a bar and enjoyed them so much he invited them to Europe. Now back again, and with a changed line up, one thing that hasn’t altered at all is that the band are superb. Pleasingly living up to the “who knows, who cares?” Genre that they’ve always subscribed to, they sound something in between Seasick Steve, Steve Earle at his most rootsy, and Springsteen if he’d played the blues on the Seeger Sessions. While on the beautiful “Cold War” sung by Rachel Ammons, they do a passable impression of The Be Good Tanya’s. Normally Ammons can be found, along with her bandmates Smilin Bob and Scott Leeper, as well as Miller kicking up a kind of hoedown and nothing is off limits it seems, as the rearrangements of “House Of The Rising Sun” and “Black Betty” show. Tremendous fun all round.

You kinda know you’re cool when a roadie marches on with a cigar in your encore, puts it in your mouth and lights it for you and all the while play your solo. Billy Gibbons doesn’t need such validation after a career that stretches not far off 50 years, nonetheless that’s exactly how he chooses to usher in the opening riff to “Tush” in the first encore tonight.

The three piece have been all too infrequent visitors to these shores over the last decade or so – this is their only headline gig of 2016 and takes place as they are on the way to Glastonbury – but few bands have the back catalogue, the charisma and the ability that ZZ Top do.

The set is much the same as they’ve been playing for the last couple of years, which means “Got Me Under Pressure” and “Give Me All Your Lovin'” open things and if those are still polished pieces of brilliance, then the likes of “Waiting For The Bus” and “Jesus Just Left Chicago” prove that no one has ever got this boogie blues thing down quite as well as them.

There’s more to it than that, of course, and “Cheap Sunglasses” is superb, while “I Gotsta Get Paid” is the best thing they’ve released in decades. It is, though, “Sharp Dressed Man” and “Legs” that sold gazillions and put them right at the zeitgeist of MTV, and watching them don their furry instruments here, you understand the power of those songs still.

The  encore of “La Grange/Sloppy Drunk Jam” and the afforementioned “Tush” is as cheerfully looking for trouble as ever, and such is the reception they receive, they are back for a second curtain call, with “Sixteen Stone” and “Jailhouse Rock” – sung by Dusty Hill here – providing an unexpected conclusion.

It is also perhaps the only time in the set that the three let their hair down and live in the moment. It’s perhaps true that ZZ Top’s gigs – although always superb – are a touch sanitised and more like recitals these days. To see them here genuinely enjoying the Merle Travis and Elvis songs with the glee of the real fans they no doubt are, made this a real treat.

And perhaps more fun for them than the mud of a Somerset field? To paraphrase Billy Gibbons, yeah we’re having a good time, now.