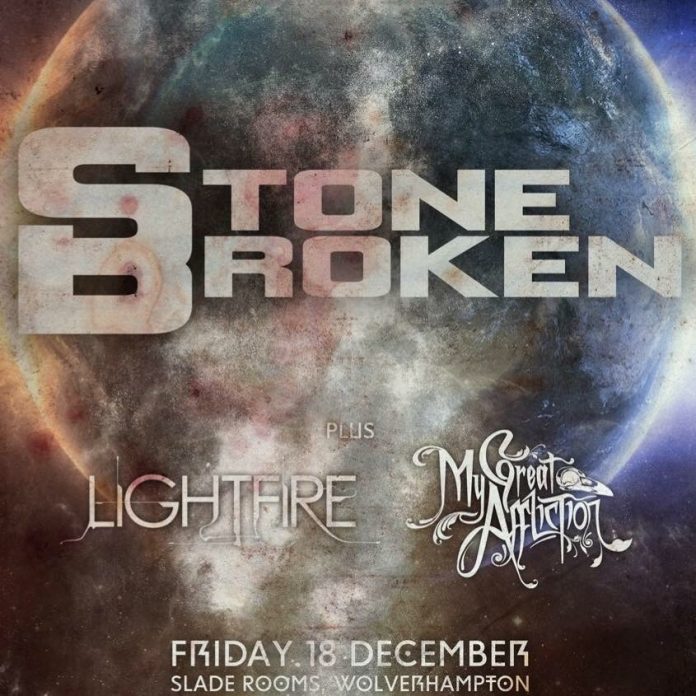 The curtain comes down on the gig year in fine style

Christmas, it seems, is not declared officially open these days until MV has seen My Great Affliction. Almost a year to the day ago they performed opening duties in this very room and here they get the chance to impress again. It’s an opportunity they duly take with ease, but do so on the back of a lot of new songs. One, “Woohoo”, is a catchy metal take on Blur’s “Song 2”. Another, “American Dream”, goes rollicking along an Orange Goblin type road, as riffs and guitar tone is king here. This is not totally new look though and “Mountain (Out Of A Molehill)” is excellent, as is the closing “Narcissist”. Fresh new songs and a new outlook means the future is bright for the trio and My Great Affliction could have a happy 2016.

“Ow do?” Offers up Lightfire singer Scott Sireradzki. For anyone not from the West Midlands this means two things: firstly he’s saying “good evening Wolverhampton” and second it means they are local. From just up the road in Cannock to be exact , the lads have come admirably festive in their Christmas jumpers – Scott gets a bah humbug pat on the back for discarding his after the second song. The five piece (although they are a man down here) deal in alt. rock, filled with big riffs and bigger ambitions, occasionally bringing to mind bands like Karnivool when they restrain themselves and deal in huge as opposed to big. Capable of driving, pulsing riffery when they choose and a couple of newer ones have this by the bucketful. Older work like “The System” still has enough exuberance to impress and “I Am Giant” doesn’t half sound like its New Zealand namesake as it soars. The first Christmas song of the evening – and we are in the Slade Rooms after all – makes an appearance and Noddy and the boys are given a try, but it’s Lighfire’s own songs that really impress here, and “TBFOD” (no, us neither!) is worthy of closing an interesting set.

Let’s get straight to the nub of the matter shall we? On January 29th 2016 Stone Broken are going to release their debut full length album “All In Time”. MV is publishing a review of it on December 30th. But here’s a spoiler alert. It’s brilliant. And we don’t just mean it’s good, we mean it’s good enough to move them onto the next level. Tonight is the album’s launch show. And a very healthy throng is in attendance to see it.

There’s a quiet confidence here. The band must surely know what’s in the bag and they must be dreaming about what’s in store. And probably by the end of “Not Your Enemy” – first track here as it is on the record – so do the hundreds chanting their name.

Again another spoiler alert: in the album review MV has written a line that comes to mind again and again here. This is arena rock on a local scale and tracks like “Better” can’t understand why they are not 20 miles down the road in the Birmingham arenas.

Resisting – perhaps rightly – the temptation to play the whole of “…..Time” in order, before putting down their instruments and saying “we made that, who wants to touch us?” after a giant “Save Tomorrow” it’s time for the reboot of “Let Me Go” which was imperious on their debut EP and is a showstopper here. Let’s be blunt about this: if Nickelback had written it Chad Kroeger would have another wing on the mansion.

Even the ballads here are brash. “Wait For You” flies high, and “Another Day” out Pearl Jam’s Pearl Jam, if you will. The single “Stay All Night” on the other hand, is about as excitable as kids will be in a weeks time.

Speaking of youngsters, Stone Broken are all in their 20s, which makes them babies as far as we are concerned. It also means they grew up in the 1990s. Therefore, they are allowed to rock up the Backstreet Boys “Larger Than Life” if they want to – they do it rather well too. Come back and see us when you can do Kylie, though, because surely that was pop’s peak? (You’re sacked – Ed).

“Fall Back Down” – and of all their hooks this is probably the best – ends the set, but this is their big night, so there’s an encore. A medley which takes in amongst others, “Breed” and wins bonus points for having the best grunge song ever “Man In A Box” (if you weren’t clear) in it, before adding “Are You Gonna Go My Way?” a drum solo and the opening riffs to “Back In Black” and “Sad But True”.

“This Life”, another from the EP that’s on the album concludes a night that is a fitting launch to an album that, if you like hard rock with a groove and a chorus that has never been ashamed in its life, you need to hear. You will. All in…urmm good… time.