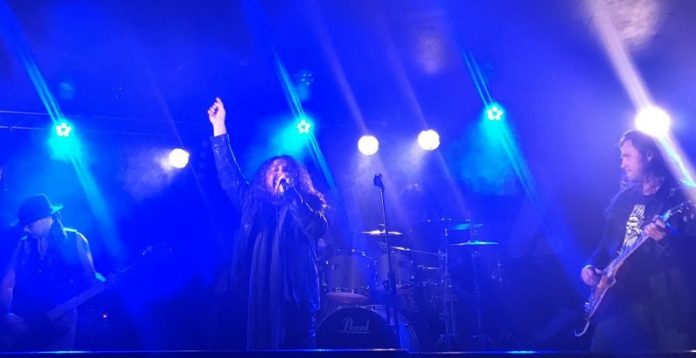 As a phrase uttered onstage by a performer, this may be a first: “the science behind this isn’t solid……” so says Gabriella Jones before playing “Sweetest Little Meteorite”. Whilst MV has absolutely no idea about science, we do know a soulful, gifted voice when we hear one and local woman Jones has one of those. What she also possesses – and her time onstage makes this abundantly clear – is a varied songbook and a band which can pull it all off. “Losing My Baby” is a slow and brooding affair, “Midnight Drive” is something far more bluesy, but there is a feeling that for all the different sides to what she has, Jones is happier when the tempo is up. The closing “Take Me To The Party” is all the rock n roll fun you can handle, and there is plenty to suggest here that the more confident she gets, the more you can expect to see of Gabriella Jones.

Imagine being Samarkind. Imagine having songs ready for stadiums – never mind arenas these boys are not messing around thinking that small – but then the reality being that you have to play gigs in scruffy parts of Birmingham in rooms that you know you don’t belong in.

You could get downhearted, or you could, if you are the multi-national four-piece, just play like you have the unshakable belief that you were born to do this and treat such nights as necessary things along the way.

Right from the moment we heard their self-titled debut album in the autumn of last year, we’ve been tipping Samarkind for the top and what happens here does little to assuage that view.

Most of the album is played in their 45 minutes, “Black Rain” is a massive statement of intent in all senses of the phrase, and the thing about them is for all their bombastic nature, Samarkind never stray into the real overbearing stuff that some of their contemporaries might.

This is largely because in singer David Paul Byrne – playing a hometown gig for although he is an Irishman he was born here in Brum – and guitarist Michal Kulbaka, they have some real talent in their ranks, ably backed up by a rhythm section that makes mighty look normal.

The single “Sun Stroke Heart” shows why it was so highly regarded, while the highlight here tonight is undoubtedly “Good Man Call”. The solo alone is worth the admission price and the howl of the vocals matches up, while “Fire And Blood” likewise simmers with a real intent.

“Blue Mountain” is an outright foray into the blues, but of the bombastic variety rather than anything Robert Johnson did at the crossroads with the Devil and in that context the closing take on Deep Purple’s “Mistreated” suits them perfectly, given that they belong somewhere between that era Purps, Led Zep and Free.

And if those seem lofty names to bandy about after eight songs and 45 minutes on a cold, damp Saturday in a small room, then maybe they are, but it won’t stop Samarkind thinking big. Neither should it, because they have the potential to be special.