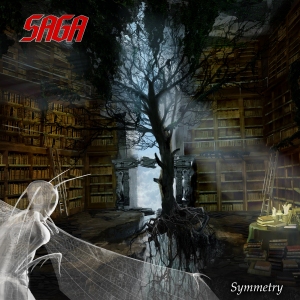 A band deciding on an acoustic / unplugged release may not be that unusual but when the band in question utilise banks of keyboards around the stage for their live shows, and have been known for all five band members using synthesizers (including the drummer) then the significance of leaving a raft of electronic equipment switched off this time round is at least intriguing. Add to this the prospect of the lack of the usual palette of complicated electric guitar solos and multiple keyboard interplays, a key challenge for the new release is going to be successfully maintaining the regular Saga listener’s interest.

The soon to be released ‘Symmetry’ (12th March on Ear Music) by Canadian Rock / Progressive / AOR band Saga, and follow up to their last studio release ‘Sagacity’  (2014) is the culmination of their recent acoustic endeavours which sees the band make a shift in direction with a newly found vigour. Having formed in 1977, and with well over 20 studio albums from which to choose the eventual selection of 12 tracks, keeping their loyal fans happy with the inclusions is sure to have been a further challenge.

The album starts with a radically different take on ‘Pitchman’ from the Heads or Tales (1983) album followed by ‘The Perfect Time to Feel Better’ a reappraisal of ‘The Perfectionist’ pulled from their self titled first album.  Two tracks in and you realise that this is going to be more than a simple unplugging exercise. The selected pieces are not just re-workings of individual tracks but at times totally re-imagined compositions which might include more than one or two influences from their catalogue. The conjoining of extracts from different tracks proves to be a successful ploy as material is carefully and neatly entwined to form new creative pieces. This in turn helps them to bring new life to more of their extensive back catalogue, than the 12 titles offered from the new release initially suggests.

The choice cuts are provided with layers of piano flourishes and the presence of a variety of acoustic guitars with additional accompaniment of percussion, fiddle, cello and woodwind in a manner that ensures the usual swathes of synthesizer are not painfully missed. The arrangements are complex and intriguing. Michael Sadler’s vocals are as assured as they have ever been, but just a little less forceful this time to match the subtle but refined arrangements; providing the band’s able showman another dimension to his toolbox of already well-documented vocal attributes.

Whilst an acoustic project may suggest a calm and relaxed mode there is still enough going on in the mix to maintain interest. ‘The Right Side of the Other Hall’ which pulls together three tracks from the 2006 ‘Trust’ album is a good example of how the current Saga approach is certainly not lacking in energy.

Saga fans out there will not be disappointed. The adaptations offer enough difference without being a total departure from their more familiar styling, and the arrangements maintain melody throughout; Ian Crichton’s expertise with the fret board shines just as brightly when restricted to acoustic guitars, banjo, and as with ‘Preludes (I & II) his classical guitar flourishes. ‘No regrets’ perhaps unsurprisingly provides Jim Gilmour the opportunity to provide lead vocals and this along with a variety of other tracks, allows him to again demonstrate that in addition to his keyboard skills he is also more than adept on woodwind.

Based on what is on offer here, it seems a reasonable prospect that this release could attract additional followers to their mainstay fold, opening up the door for those new to the band, or perhaps offering those who are less familiar with the whole extensive Saga repertoire an opportunity to reassess what Saga has to offer.

There is a beauty and charm to these re-workings which is revealed over repeated listens, gradually allowing the little subtle touches in the mix to surface. Hearing these reworked pieces may well also encourage the listener to seek out or revisit, the original albums. In my case it was a good excuse for me to pull out their 1981 classic ‘Worlds Apart’ (like I need an excuse – who am I kidding?).

By the time you get to the final track of ‘Tired World’, if you are already a fan, it is likely you’ll be left considering the tracks that have been omitted and start to become hopeful that the band will consider applying the same process to some other classic Saga cuts in the future – the model provides so many possible considerations and permutations. However, perhaps a more exciting possibility is the prospect that this project leads the band to consider the benefit of incorporating some of the dynamic differences achieved here for a future completely new recording. Saga are a band who have tried to retire in the past, and for me, based on the merits of this latest release, I am glad they failed to resist (un) plugging away. Let’s hope this classy release helps them to keep hold of their mojo, as I for one am left pondering with excitement for the prospect of a future Saga studio release that allows the band an opportunity to weave some of this new found fresh dynamic sound with some of that old school Saga full-on approach. I do hope Saga’s efforts get the recognition they deserve as this new release provides them with a clear blueprint for one or more exciting additional chapter(s).