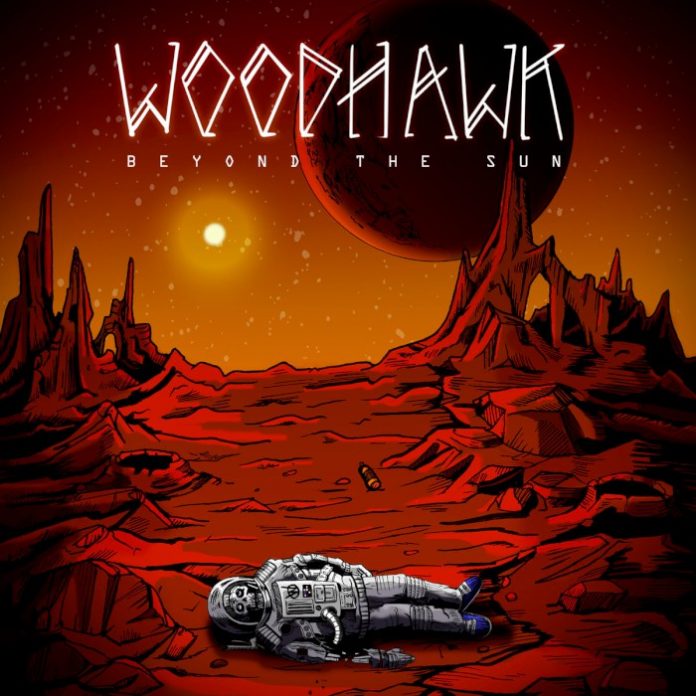 Calgary rock trio hit the ground running with their debut album and set their sights high for future success.

Rock music has served well with power trio’s.  From the psychedelic blues of Cream, the genius of The Jimi Hendrix Experience, the glory and prog majesty of Rush through to new wave brilliance of The Police and into the modern day pop-punkers like Green Day.  There is something about a band that consists of a drummer, a guitarist/vocalist and a bassist together that makes the hairs on the back of the neck stand a little straighter.

Canadian new boys Woodhawk are in a Rush themselves but have a hell of a mountain to climb if they want to share accolades with the like of the aforementioned bands.  You’ve got to start somewhere though and after one spin of this debut release I would wager that the greatest power trio’s would have been hard pressed to come up with anything better on their first attempt.

The opener and title track is a cross between Soundgarden and modern-day Mastodon, a great mix if you can pull it off.  And they do.  It’s a haunting, almost gothic and ethereal opening that turns into a sprawling landscape of jangly mid-tempo guitars and thick basslines, courtesy of Mike Badmington.

“The High Priest” kicks into gear with a ferocity and energy that burns a hole straight through the titular sun. The chorus refrain of “I am the high priest, bow down to me” is one that will stick in the head for a long time.   Vocalist and guitarist Turner Midzain has a voice made for this stoner rock ‘n roll that also contains a few layers beyond the norm.  At times soulful at others reminiscent of the genre’s finest musical orator’s.

Once the third track “Living In The Sand” is over you know that the rest of this aural journey is going to be nothing but a real pleasure trip.  Kevin Nelson’s thunderous drum patterns drive the tracks forward with enough velocity to crash through whatever speed is required to get one beyond the sun.

These guys know how to form a rock n roll riff.  In fact they know how to form plenty of very high quality riffs.  That said, one pleasing thing about this “stoner” album is the lack of repetition but there is a familiarity about each track which shows a band fully confident in their sound and musical vision.  There is a delightful two minute instrumental called “Forsee The Future” which showcases the band’s ability to combine simplicity with genuine musicality.
“A New Hope” goes far beyond the sun and into another galaxy.  As sci-fi movie lovers the world over may notice something in the title.  However Woodhawk have dispensed with any subtlety and gone headlong into Star Wars geekdom as the track regales the listener with the joys of the first film of the franchise.

Beyond The Sun is an exceptional debut release from a band that scarily will probably only get better and better.  Where A New Hope trod new ground for sci-fi cinema there is a feeling that Woodhawk may have started a stoner rock rebellion of their own.  They certainly have The Force on their side.