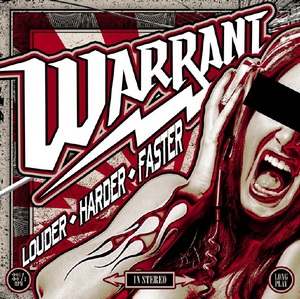 The Down Boys return with first new album in six years and the first since the passing of former vocalist Jani Lane.  Can the band recapture the glories of the late 80’s and early 90’s?

In the vast majority of cases it can be a thankless task for a band who were popular and regular chart botherers back in their glory days to try and keep the original fanbase happy and try to move on and be relevant in today’s very different musical climate.

Warrant’s history since those halcyon days of the late 1980’s and early-mid 1990’s has been turbulent to say the least.  Repeated attempts to bring back original vocalist and songwriter, the late Jani Lane, following their much publicised falling out in 2004, proved to be short-lived.  Good singers have tried to add their mark to the band such as Jaime St. James who recorded the Born Again album with the band before being replaced by Lane.  His return was only temporary in the end and he was subsequently replaced by Robert Mason, formerly of Lynch Mob.  In a sign of rare stability Mason is still with the band now and this is his second album following 2011’s Rockaholic.

Following a somewhat revolving door policy of members in the past couple of decades the band is now what is commonly regarded as the classic line-up, aside from Jani Lane.  Guitarists Erik Turner and Joey Allen join drummer Steven Sweet and bassist Jerry Dixon for the second album in a row and the results have never been more spectacular.

If you were under any illusion about how good the band could be after a staggered 20 years then your answer can be found in the opening title-track “Louder Harder Faster”.  It’s no overstatement to say that it is one of the best tracks they have ever recorded.  A fast and free flowing hard rocker that demands to be turned up to 11 and reminds you why you love rock n roll music in the first place.

Off to a blistering start then but can they keep the pace and intensity.  Next track “Devil Dancer” drops the throttle back a touch but maintains the intensity and quality

It’s not all full-on hard rock as usual with bands of this vintage there are the slower, power ballad-esque numbers to balance everything out.  The lighter moments come courtesy of the piano-led “U In My Life” and “Faded” neither of which will approach the impact of the band’s classics like “Heaven” or “I Saw Red” but nonetheless are decent tracks in their own right.

Enough of the balladry it’s rock n roll the listeners want and there are plenty of tracks on the album that offer just that, and then some.  “New Rebellion”, “Big Sandy” and “Choose Your Fate” keep the octane levels high whilst.

Aside from the title track then the next best track is the superb slow-burner “Music Man”.  The chugging riffs roll the track along like a ten ton truck backed up by some smart wordplay.

The Down Boys are back on the up.