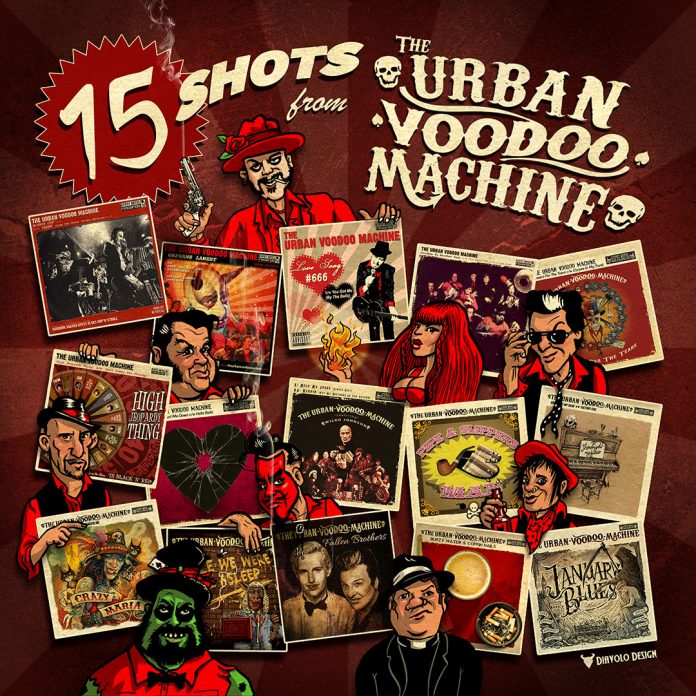 Anyone who watches boxing will surely be familiar with the concept of the “avoided fighter”. The superb pugilist who never gets the big shot on the big tv bill because he’s an awkward sod. Impossible to look good against. He’ll hold, scratch, bite, whatever. He won’t do what is expected and he’ll make the hot young prospect look like a mug.

If music has an equivalent then, blimey, let us put forward The Urban Voodoo Machine. Since 2003, they’ve merrily done whatever they want, not what they’re meant to, and more pertinently, they are impossible to quantify.

Which brings us neatly to “15 Shots From…..” a career retrospective featuring all their singles right up to the fabulous “January Blues” released this year, which is the most honest condemnation of New Years resolutions ever. New year, new start, new you? My arse.

“Love Song 666” is surely the only romantic song that starts thus: “so, I fucked your sister, tried it on with your mother, kicked the shit out of your brother, but darlin’ I loved you.” And “Goodbye To Another Year” (which sees Sami Yaffa join in) is like some Russian Oompah Band getting very drunk.

The thing about The Urban Voodoo Machine is they aren’t being intentionally wacky, or making some unlistenable bag of crap that you are made to feel stupid about if you don’t “get”, instead they are writing brilliant songs. Songs that just happen to sound like no one else’s songs.

Take “Cheers For The Tears” as an example. Blues hasn’t sounded this primal since some nonsense about Robert Johnson and the Devil, or “High Jeopardy Thing” which brings Jim Jones in for some New Orleans second line, or how about “Rather You Shot Me Down” which is like the soundtrack to some Western from the cutting room floor, while “Help Me Jesus” – on which Wilko Johnson does what only he can – is flavoured with gospel.

Throughout all this, though, TUVM are writing about their existence. These are songs that are infused with East London in the same way that Springsteen’s, say, are cut from the soil of New Jersey. It’s just that rather like The Boss, the themes are universal. To that end the incredible “Pipe And Slippers Man” deals with the onset of aging, it just does it like it was made in a honky tonk at the height of the prohibition era – oh, and features a kazoo solo.

It is just that they don’t think like others. “Goodnight My Dear” sort of sounds like Tom Waits, although not even Waits was quite this broad, and whatever is going on in “Crazy Maria” sounds downright nefarious. “While You Were Asleep” might sound like it is a nightmarish vision of Willy Wonka, but its lyrics are as political as Billy Bragg.

“Fallen Brothers” deals directly with the tragic loss of bandmates while sounding like it belongs in a town square in Eastern Europe, and “Rusty Water And Coffin Nails” is as dustbowl as Johnny Cash. Timeless maybe? Totally in keeping? You bet.

If “15 Shots From…” rather defies classification, then it does serve to prove that the next time someone says “there’s nothing original anymore”, they are talking shite.