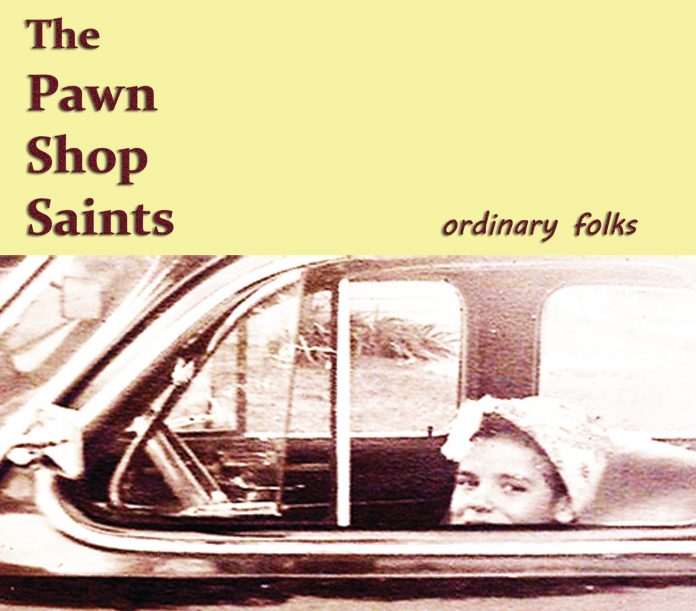 A couple of years ago Jeb Barry And The Pawn Shop Saints released an incredible record, “Texas, Etc…..” was one of those that leaves you marvelling at the use of language, the storytelling, and almost demands you respond in kind,

On that review, I got kinda personal – the girls names I used in it were real, believe me – but crucially, I ended it thus: “Mammoth, sprawling, clever, bleak and brilliant, that’s these 20 songs in six words.”

If that was accurate, then this one, is different. Nine songs, just half an hour. But for all the brevity, then everything else I said about that record could apply here.

If “…Etc” was about, it seemed to me, loneliness, and a broken heart, then this is about people. “Ordinary Folks” is well named, that’s for sure.

Back when The Simpsons was good, there was many a brilliant scene, but one I always come back to is the one where Marge is discussing her childhood dreams. “I always wanted,” she says, “to be in the audience of a Broadway Show.” That’s perfect for most people, because most of us just want to get by, not to hit the heights, we just want to live.

These songs are for us.

“You Don’t Know Cumberland” which contains the line: “I wish my family was the college going kind, that’s about the only exit…..” is about the small town existence, and it has an absolute charm. “Old Men, New Trucks”, where the drivers are “talking to heaven and the only girls they love”, is melancholy, but also beautifully poetic, and you can see exactly why Barry has been compared to Jason Isbell, but also surely there’s a wider Drive-By Truckers thing, given that these stories are told in such an original way.

“Body In The River” is another prime example of this approach, as you only get – like with Patterson Hood or Mike Cooley – half the story, and this one is one of a few where the instrumentation isn’t sparse, even barren.

Best of all, though, is “Southern Mansions”. Recalling MV faves The Bohannons, it talks about the people who live off the interstate, the forgotten. The ones we could, and probably do, dismiss as “trailer trash”, but it celebrates what binds us. “If you say hello” offers Barry, “you’ll get a friendly story.” It is a truly wonderful piece of music.

“New Years Eve, Somewhere In The Midwest” – written in response to a tweet from Jason Isbell –   reminds me of what the Hold Steady would be if they did an acoustic album, and when I listened to “Ain’t No Mama” at first, I thought of the old standards as on “O Brother, Where Art Thou?”, when I read the notes, I was actually half right. It is an adaption of an old gospel tune.

The way they weave the tales of the ordinary, the downtrodden, if you like, is never better shown than on “Pack A Day”, with its beguiling bass, lead guitar line and thoughts on the factory worker who needs an escape.

“Lynyrd Skynyrd” wonders whether music saved us. It offers no conclusions, but it belonged on DBT’s “A Southern Rock Opera”, while “Dry River Song” would have many an Americana artist getting very excited. To be truthful, not many of them could have made this record. To do that takes a rare talent, one that the four men here clearly have.

I did wonder how to sum the album and did think of moving that Simpson’s analogy into the conclusion, but the thought I kept coming back to was this: If “Western Stars”, was Springsteen observing the people he saw on his road-trip, then “Ordinary Folks” is about the ones he never even noticed.