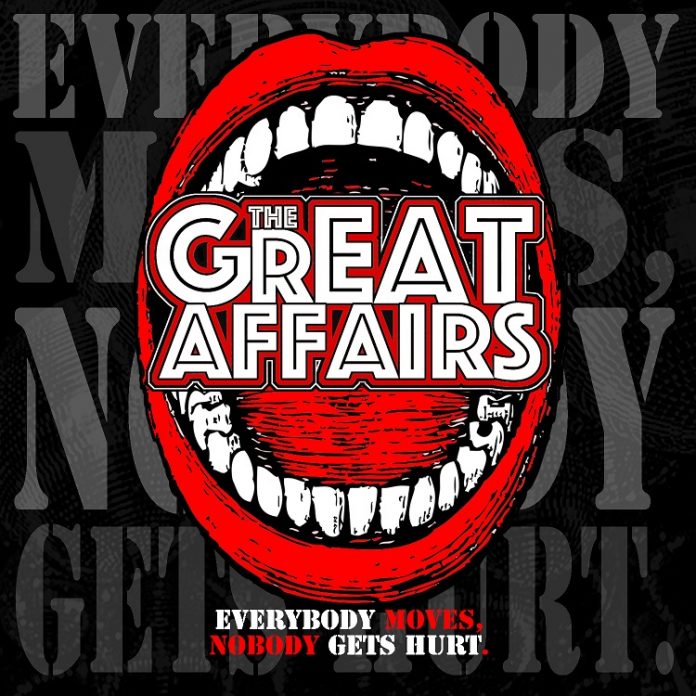 When I was doing some research (honestly, I do!) before writing this, I went on to The Great Affairs website. I wish I hadn’t bothered.

That’s no reflection on the band – or indeed this record, which is superb – but, well. I’ll explain.

See, “Everybody Moves, Nobody Gets Hurt” has been out for a few weeks, and how did they celebrate this. From that very website, this is how: “We’ll be celebrating the album drop tomorrow(10/3) in Evansville, IN at Bokeh Lounge, doing an “Evening With”-style show, playing all night, with sets featuring stuff from every record in our catalog, along with a few covers we fancy, so wear sensible shoes if you plan on attending, because we’re going long.”

A proper gig. A real thing. Something you can be part of. Not a soulless thing on Facebook. Damn.

I’ll bet it was fabulous too, because this is exactly the sort of music that should be played live, to people, by people who give the impression that if they weren’t on stage, they’d be in the crowd.

Even if, you’ve never heard of TGA before, then you have heard them. Right from “I’m Alright”, the gleeful opener, this a journey through rock n roll. The sort you, me and everyone with any taste has always loved. When I was six years old, in 1982, My gran worked in a shop where there was a box of singles. I used to take my pocket money there every time we went to visit. The first single I can really, properly remember buying was “Centerfold” by J. Geils Band. This has the same gritty vibe.

Indeed, “….Alright” is way better than merely “alright”. Taking as it does the idea that Cheap Trick might jam on some Georgia Satellites tunes as its starting point.

That said, don’t think this is going to be a template for the album. No, instead, “….Hurt” does its thing, by begging, borrowing, stealing and rocking just the way it damn well pleases. “Believe In Ghosts”, a mid paced radio rocker, would make the likes of Gin Blossoms blush, “Lyvia” is an arena filler. Think Stereophonics in the “Dakota” era, or “High On Rose” which is so good it might be better than the opener. If you have heard The New Roses, you need this in your life. A 70’s sounding thing, but not retro, and crackling with energy.

As if to emphasise the point that this won’t fit in your box, nor does it do what you think it will, “In The Wreckage” would, if it was a Goo Goo Dolls song, see Messrs Rzeznik and Takac polishing another gold disc. Which they merrily follow up with a slice of piano led grandiosity, in “Worn Out Souls.”

Genuinely, it Is staggering how much ground they cover here across these ten songs. “Light Years” is a glam infused thing, “Three Leaf Clover” is a catchy slice of airy summertime, that has me longing for The Trews, while the day a song like “Satellite” can’t make the world better is the day we should all draw the curtains. From the same dirt roads as Petty, but sounding like everything and nothing all at once, this is music for and by people that just love it. Simple as that.

It even finishes with a genuine hard rocker. TGA have opened for Cinderella’s Tom Keifer and Jack Russell’s Great White. If they ever do again, this will go down a storm.

The Great Affairs here, surely are lust filled nights with your rock n roll bit on the side? The real skill here is that they pull all the disparate threads together and make it so cohesive. Like a compilation album, but all by one fantastic band, “Everybody Moves, Nobody Gets Hurt” is basically the sound of Denny Smith dusting off his songbook – and it is a real diamond of a thing.