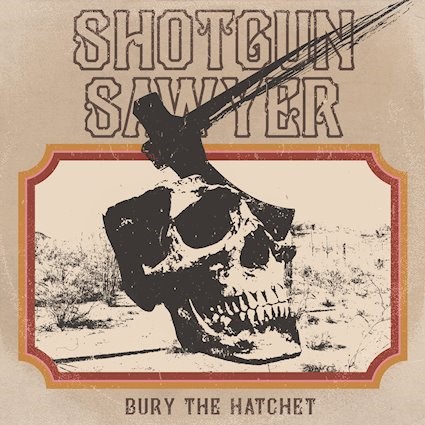 Two years on from their debut album (Thunderchief – given 10/10 on this site), California’s Shotgun Sawyer return for Round Two.  Now signed to Californian label Ripple Music, this has seen them attack the studio brimming with confidence and the result is raucous affair which gets your attention from the opening riff and doesn’t let up until silence arrives at the end of Track 9. The song writing is great and the trio of Brett Sanders on bass, David Lee on drums and Dylan Jarman on guitar/vocals all deliver their parts in equal measure.

Now, back to that opening riff – the riff to ‘Ain’t Tryin’ To Go Down Slow’ is a hybrid mix of  ‘Stranglehold’ and  ‘Whole Lotta Love’ – it’s a thing of beauty and if there is a Riff Of The Year award, consider it won. The rest of the song doesn’t disappoint either as the rhythm section batter the song into submission behind Jarman’s impassioned vocal and screaming solo.

‘(Let Me) Take You Home’ follows and it’s a slower number that chugs along in a bluesy way, stops for a breather and then serves up a tasty instrumental passage before returning to the original riff.

‘Backwoods Bear’ sees the acoustic guitar come out of its case. The song is underpinned by an acoustic slide riff and solo and it is probably the closest this album gets to the Blues. It’s a nice contrast to the opening salvo it follows and shows that Shotgun Sawyer isn’t just about playing loud.

However ‘You Got To Run’ can only be described as loud. Released as a single last year, it works even better as part of an album and is a full on rock song pure and simple.

‘Son Of The Morning’ is the longest song here (just) and it starts with a lengthy instrumental passage before the vocals kick in I think this has the potential to be a big track in their live set as it build to be their own ‘Bridge Of Sighs’ or ‘Dazed & Confused’ – it gives the guys the chance to stretch out and show their musical abilities and could be a real showcase number.

Talking of 70’s influences, ‘Hombre’ follows and it is the best song ZZ Top never wrote with a similar riff and shuffle to the mighty ‘La Grange’. Hats off to Sanders & Lee on this one as they lock into the groove whilst Jarman sings of his woman troubles.

The hum of an amplifier greets ‘Love You Right’ and it’s a loud slice of blues rock that will appeal to Bonamassa and Rival Sons fans alike. Whether Shotgun Sawyer reaches the commercial level of those two remains to be seen but musically that’s the territory they work in, so there is no reason why not.

‘When The Sun Breaks’ is next – musically has a Led Zeppelin influence all over it and to my ears it’s their take on ‘Since I’ve Been Loving You’. There’s no attempt to mimic Plant’s vocals style though (a good thing), so it still sounds like a Shotgun Sawyer song though the blues solo is one Jimmy Page would be pleased with – that’s meant as a compliment by the way. It’s another song that could be a live showcase number as its finesse provides a nice contrast to the power of the faster songs.

Whilst I love my fast rockers, I think ‘Son Of The Morning’ and ‘When The Sun Breaks’ show the true depth of the Band’s abilities, though closer ‘Shallow Grave’ ups the pace again and features some great slide guitar before slowing things back down as it plays out to the end.

Shotgun Sawyer played a lengthy European tour in 2018 which missed the UK and they are hopefully going to finally make it here in 2020. I think their live performances will be the key to a UK following and if they get the opportunity who knows what they might achieve. In the meantime they have waved away those ‘difficult second album’ worries to deliver a fantastic set that deserves to do well.