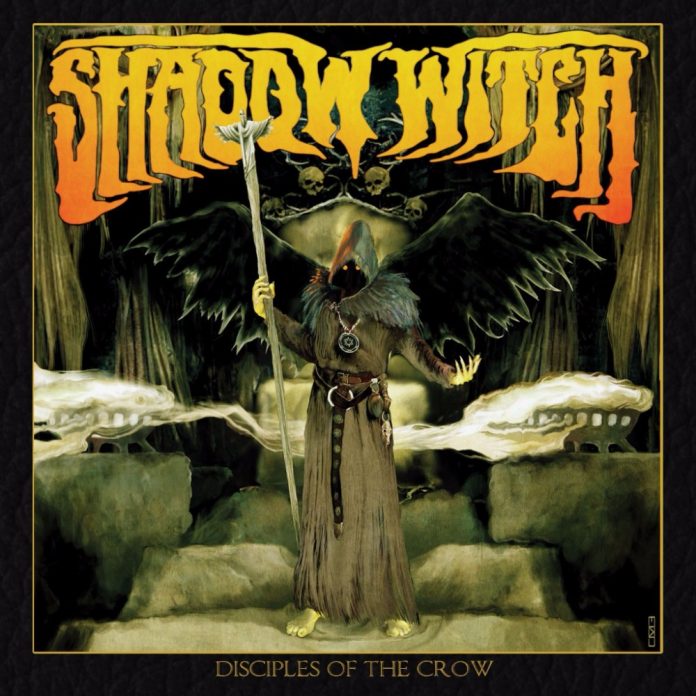 If the name alone suggests that New York’s Shadow Witch might be a throwback, then the fact that “Disciples Of The Crow” is their second record in as many years confirms that they have the same work ethic as their heroes too.

The debut “Sun Killer” garnered praise from just about everyone. “….Crow” is more than primed to do likewise, not least because if you imagine that it is just another seventies sounding identikit stoner thing (as we must admit we expected from the cover) then you’d be wrong.

Because, far from meandering and having every song clock in at eight minutes or more, this is a collection that is shot through with an adrenaline boost of proper urgency.

“Love Could Be Like This” kicks off with the usual dry as dust riffery, but before even the first intro is out there is a drop of the occult, a touch of the primal and a whole dollop of blues.

Maybe it’s because the veteran musicians that make up Shadow Witch come from disparate backgrounds, maybe it’s just that rare alchemy that happens from time to time, whatever, it’s made “Disciple Of The Crows” a little bit special.

The brilliant “Reap” makes that plain. Chunky, dry as dust riffing and a huge breakdown at the end hint at one thing, but the vocals of Earl Walker Lundy mean this beats with a hard rock heart. Less a singer more a force of nature, Lundy takes this into areas other bands like SW don’t – or can’t – enter. On the highlight that is “Cruel” he makes this plain: “your creature comforts, honey that don’t mean a thing to me,” he roars (Lundy roars most things in fairness) and you won’t be testing his patience. A phenomenal slice of music rooted, but never beholden to, the past, it is in a nutshell what makes Shadow Witch so damn good.

The title track takes things into a slightly scary area. All fuzzy eeriness, it sees things take a turn, before Stranger Skies has the same kind of desire to get from A to B as early Led Zep, while lyrics about “dragon God’s” make sure it all gets very Game Of Thrones – or at the very least Ronnie James Dio is putting Devil Horns up in appreciation.

The one that follows this, “The Sea” provides quite the contrast. Epic in feel, it is a mighty slow-builder, while “Beneath The Veil” simply pummels, for 189 seconds of visceral fun.

Indeed, that is a feature of this record. Around 40 minutes long, some of their brethren might only just be into their third song by the time these boys are in the bar and because they are to all intents and purposes a hard rock band, SW can even make their psychedelic ones like “Dead Heroes” catchy as the flu.

An unexpected gem? Maybe. Whatever it is though, Shadow Witch are too good to simply be a cult act known only where blokes with beards and a love of the riff congregate. With “Disciples Of The Crow” they truly fly and there is gold lurking in the darkness here.