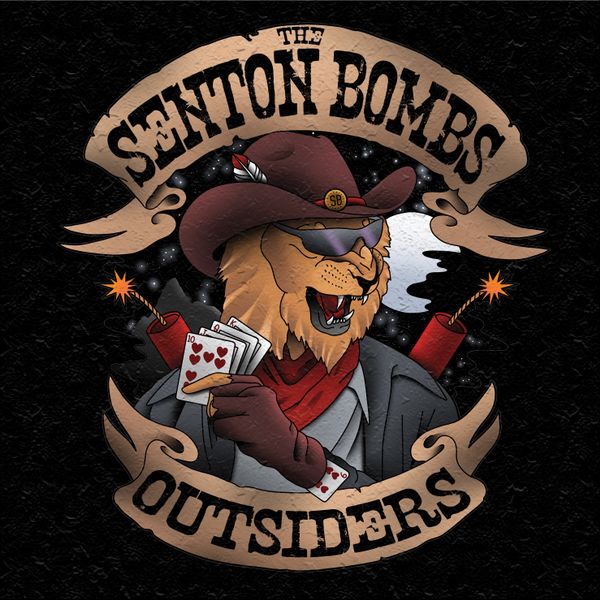 So sing Senton Bombs on the opening line of this – their fourth album.

Think about those words for a sec.

The other week I reviewed the new one from The Virginmarys and there is something of that in this from Senton Bombs. If not sonically, then certainly in attitude.

Maybe it’s because they are from Blackpool in the North West rather than big cities (and as an aside about not fitting in, I went to Blackpool on a stag do 20 odd years ago – trying to prove to a girl that I was “normal” as it goes – and was so bored by the middle of the afternoon in some dodgy back street strip club I went to watch Blackpool play Gillingham at home in the football on my own, and then drove home so I could watch my team play the next day……) but there is something fearsomely independent about them – together with a small town anger that burns – and what’s more a sound you can’t pin down.

One minute they’re stomping about like The Cult on the title track, and there is a barely concealed rage here. The next they are bursting out with the chugging brilliance that is “Who We Are”. The first single from the record and one possessing a chorus that would have made Honeycrack jealous in the 90s.

“Violet Black” has a punkier edge. Those of us that listened to the Senseless Things in the last century will find much to enjoy, plus there’s a solo here that recalls, unashamedly, the Sunset Strip.

Indeed, this is one of those records that have so many different ideas that in the wrong hands it would sound like a compilation album. “I Am Ablaze” for example, has some drumming from Scot Mason that wouldn’t be out of place on a thrash thing, while Damien Kage and Johnny Gibbons’ guitar work is some of the most versatile around.

Why it all works so well, though, is that whatever they do, it is bound by a real quality, and a real sneer from Joey Class. “Reckless Youth” is a British version of Jovi’s “Blood On Blood” – but what comes through is the real bond between them all. “Bury The Hatchet”, about losing one of those old friends, is almost like Flogging Molly in its intent, while “Remind Me Of The Moon” is predicated on the idea that the power ballad was always cool.

“Dead Revolution” is something like The Sisters Of Mercy at their rockiest, while even their mid-paced ones like “Video” have a chip on their shoulder, a nihilism if you like. “I spend all my money, like I spend all my days. On things that don’t matter, wasting away,” sings Class here, and “Under Offer” lurks in some real dark shadows and has a metronomic quality.

“Wake The Maker” ends the thing, with something a touch more 80s sounding. Starting with a solo is always fun and as it plays you feel that if ever there was a band that is steeped in the sound and just loves what they do, then it’s Senton Bombs.

There are bands making music for all the wrong reasons and you can hear it in their compromise. Senton Bombs have never – I guess – done anything they didn’t want to. They might be “Outsiders” but they’re so good, mainstream acceptance simply has to follow – this is the sound of a band kicking down the doors.