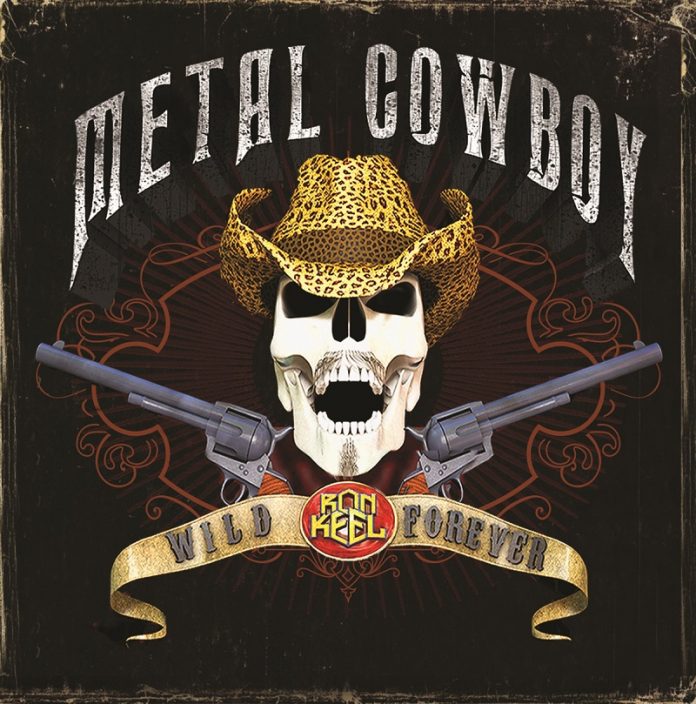 Originally released independently in 2014, “Metal Cowboy” is now properly available for the first time via Dave Ellefson’s EMP Label, and whilst four years is a long time, there is a timeless quality to these 12 songs (there’s a radio edit to make it to 13) that means that the onset of the years makes no real difference.

The clue to “Metal Cowboy” rather is in its title. Like that bit in Jovi’s “Wanted….” (Keel has played with Jon’s boys in the past) he’s a cowboy and on a steel horse he’ll ride. But, make no mistake, Keel means it. He’s got the words “Metal Cowboy” tattooed on his arms and this southern rock flavoured album seems to have been a way of life for him and his band too.

The genesis for the whole thing seems to have been two things. First, a move to South Dakota, and second the thought – which also forms one of the song titles here – “What Would Skynyrd Do?”

In that context making this kind of southern rock had a blueprint: “a little slide guitar and try to tell the truth” seems more than a throwaway line, more a mission.

That one comes around halfway into the album, and so really, it’s laid its cards on the table by then. Indeed “My Bad” has the kind of stadium filling groove that latter day Lynyrd do, with a touch of swagger about it. Keel has made his name as a kind of AOR singer, but his voice is suited to this.

“Last Ride” is faster, but happy to use the slide even over a chugging rocker, while the country tinged ballad “Just Like Tennessee” is a classy affair. Seemingly personal to Keel it is full of regret and symbolism, but wonderfully done.

Keel has, let’s be honest, been writing songs primed for arenas for years and “Dead Man Rockin’” – with the plaintive line “old rockers just die, we never retire” – is one. If your fists aren’t in the air by its chorus, then you’re doing it wrong. Better still, is “Singers, Hookers And Thieves” – featuring Frank Hannon of Tesla – a full on country thing, with its tongue in cheek and no little skill.

“Wild Forever” is proof, perhaps that you can’t take AOR fully out of the boy, while “The Country Road” – which begins with a solo and is as contented with its lot as you can imagine – is also as unapologetic as it gets.

Things get a bit keyboard heavy at the beginning of “When Love Goes Down” which is rather like what it would probably sound like if FM made a southern rock record and “Evil, Wicked Mean And Nasty” has the air of Def Leppard about it, before “Long Gone Bad” kicks in with the glee of AC/DC but remembers it’s southern roots.

“Three Chord Drinking Song” which ends the album is one of its finest moments. Remember the Bon Jovi record “New Jersey”? That had “Love For Sale” at the end if you recall? This is the equivalent. Recorded live in the studio and seemingly made up on the spot, it is as much fun as music can be.

That is, really, “Metal Cowboy” in a nutshell. Three chords, the truth, and a fun labour of love for everyone. Be very glad its seen the light of day at last.