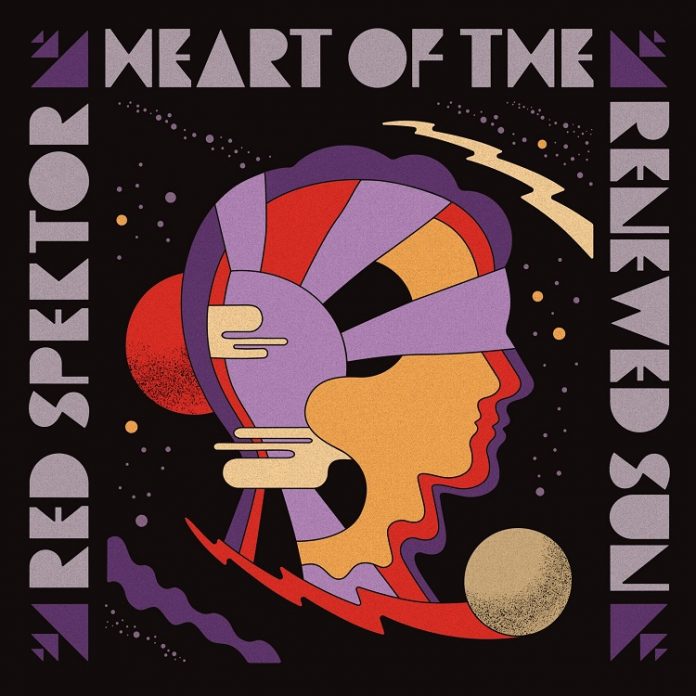 Back in 2016 Red Spektor’s self-titled debut album landed in my inbox for review. I subsequently bought myself a copy it was that good and I’ve been waiting patiently since to see what the guys came up with next.

Well that second album has arrived in the shape of ‘Heart Of The Renewed Sun’ and I’m pleased to say that all of the things I liked last time are back in abundance, though this time I actually find the overall feel a little heavier and slower paced, which is no bad thing.

I previously mentioned the Robin Trower influence in the riffing style and opener ‘Warflower’ backs that up, sounding like a prime time 70’s cut that would be out of place on ‘Bridge Of Sighs’. Bass player Rob Farrell is joined this time by new drummer Jonny Esp to provide a solid foundation to guitarists John Scane’s funky riffing. The latter also handles the lead vocals and they have a nice stoner rock feel to them which goes so well with the music.

‘Revol’ follows at a much slower pace but it is a big song that really kicks off a couple of minutes in when the main riff takes over, finally giving way to a great solo. A contender for their best song yet in my opinion.

‘Masquerade’ initially picks the pace up before settling into the same languid  rhythm of its predecessor. This has that Desert Rock feel that Nebula do so well, as it is tinged with a bit of late 60’s psychedelia to go with the brooding classic rock sound – another winner.

‘Gilded Tears’ is about as close as they get to a ballad but it’s subtle riff shouldn’t detract from the fact that it rocks as much as anything else on the album.

This leads nicely into ‘Long Way Down’ – the mixture of slow blues and up-tempo Classic Rock is a triumph and this one really benefits from extra volume – I look forward to giving this one a blast in the car.

‘Violet Sun’ lifts the tempo and is another Trower influenced song – it features plenty of terrific guitar work and is classic power trio material – also great to hear that wah-wah pedal getting some stick in the solo.

‘Hell To Pay’ is a slow blues number that will be great live. The guitar playing is outstanding on this one and it really gets heavy in places – a shame it has to end but they have saved one of the best till last.

The album closer is ‘Ivory Towers’ – an epic number where I can imagine the dry ice swirling as the spacey vocals mix with some gentle picking and the deft touch of the rhythm section. The song builds as it progresses and it is the darkest, most brooding song in the collection with the solos again having a blues influence.

The album has been kept to eight songs and I think quality and not quantity is a mantra that many bands would do well to copy. Red Spektor are different to the plethora of classic rock clones that are currently out there and I like them all the more for it. Sure, they show their influences but they have used them to create their own sound and style and this new album is every bit as good as the debut.

All the things I liked previously are back again in abundance but this time the focus seems a little more on the songs, though the great riffs are all still present and correct. The band show influences of West Coast Desert Rock and Psychedelia, the musicality of Hendrix’s Experience and Trower’s great band from the 70’s and the guitar playing generally is a real tip of the hat to Trower himself. All this by three guys from Stoke on Trent, who’d have thought? The album is recommended and yes, I’ve already bought myself of copy of this one as well.