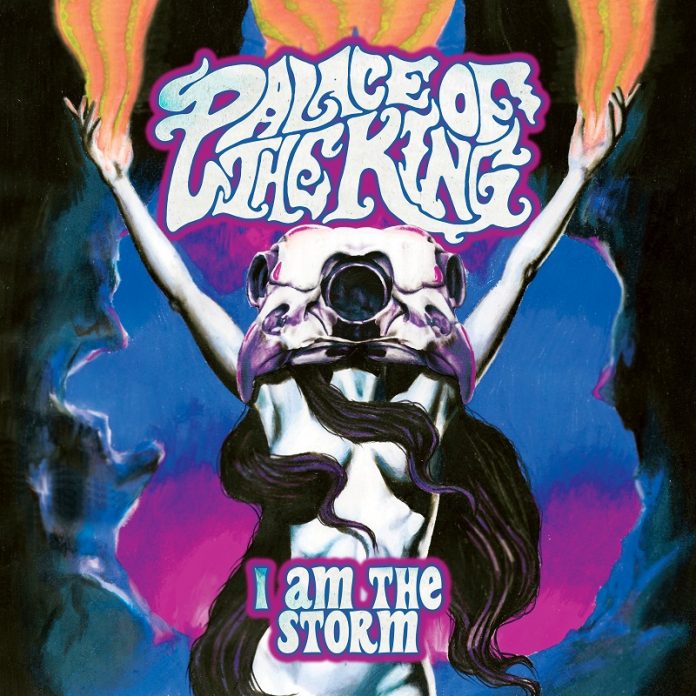 Incredible third record from these Aussies

“Get Right With Your Maker” is the third album from Palace Of The King. No mean feat, in honesty, given that they only formed in 2012. And if the previous two have been enough to get people like me – as well as all those that have seen them live and Airbourne’s Joel O’Keefe – very excited then there is every reason to think that this one is the one.

Why? Bluntly, because POTK do it their way or they don’t do it at all.

The clues are in the opening and closing songs on “…Maker.” The collection’s two big epics, the phenomenal kick off , the brooding seven minute slow builder, “I Am The Storm” isn’t the type of track you imagine that will start a record like this. And that’s the point. As is the knowing AC/DC reference before the end. “Have a drink on me,” sneers Tim Henwood and the inference is clear: we’re individuals.

“It’s Been A Long Time Coming” which follows, is more like the party starter that nearly every other band would have started with. All the 80s fun of Cinderella, it shows that Palace Of The King could, if they’d desired, been a hair metal band as happily as you like.

It’s just that they have so much else to do. Working with Machine who also helped Crobot put together their sound, sees “Sold Me Down The River” occupy the same greasy rock n soul ballpark, while “Dog With A Bone” has some real balls in its grooves, as well as a solo mixed with organs and a spot of southern rock.

“Said The Spider To The Bird” is as bombastic as the Black Crowes at their best, and is yet more proof that organ and rock n roll should always mix. On top of this, though, is the thought that whilst this is rooted in classic rock it sounds as fresh as a daisy. Indeed, never is this 70s stuff with a modern crunch better shown than on “Move To The Fire” which is what Rival Sons used to be before they went all hippy.

None of that in these psychedelics. These boys remember they are a rock n roll band at all times, “The Serpent” slithers in with some filthy intent, and POTK just have a way of making everything sound huge. And you ain’t heard mighty until you’ve wrestled with the bass groove of “Horizon”.

Not just because of the title, but there is an almost evangelical side to this. “Fly Like An Evil” sees them cast as fire and brimstone preachers for the music and everyone is a convert.

Which brings us to the end – and the other thing that will get everyone talking. “Back On My Feet Again” is polished hard rock, and you don’t have to look to far for the metaphor in the line that “ain’t nobody gonna slow me down”. But then, then there’s a gap and surely what is the first hidden track in years kicks in. It’s the title track too – and what’s more it is exactly the sort of emotional acoustic thing that The Temperance Movement thought they’d made their own.

Here’s the thing though, if you’ve got the confidence to not even bother putting your title track on your record, then to be honest, you can do anything, and on this evidence Palace Of The King can do anything. If there’s any justice in the world then their third record would do what Springsteen’s did in the 70s, or Bon Jovi’s did a decade later. Time will tell, but they have got it so right here.