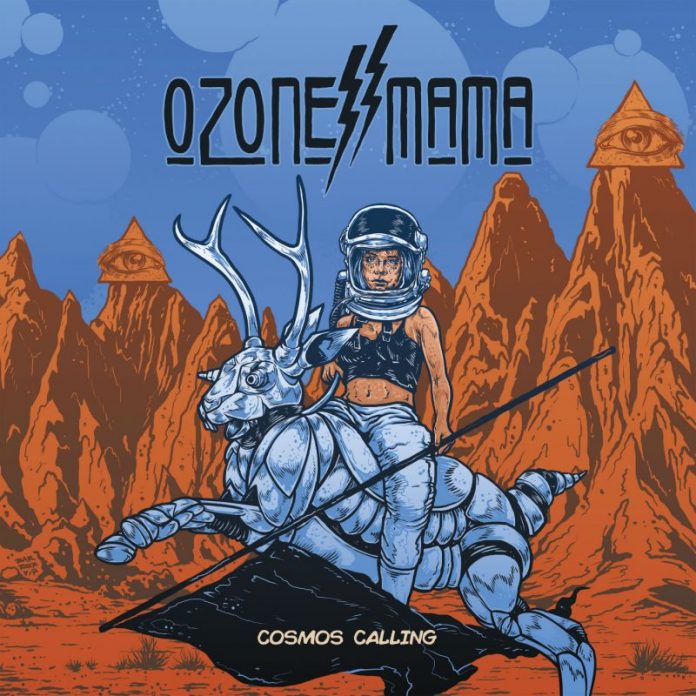 From Hungary to the world

Ozone Mama are already award winners in their homeland. Both their full-length albums to date, the 2012 debut and 2016 follow-up, have received the Fonogram gong at the Hungarian Music Awards, but now the four piece are very clearly setting the bar a little higher.

Vocalist Márton Székely, guitarist András Gábor, bass player Gergely Dobos and drummer Máté Gulyás have long been a hip name to drop where anyone who likes 70s drenched rock n roll congregates (largely a self-publicising outfit too until now, they were a band of the day on this site almost three years ago) but there is a feel that with “Cosmos Calling”  – their debut for LA based Ripple – they intend to make things happen on a worldwide footing.

The 11 songs here (the eastern tinged opener “Evil Ways” amounts to an intro) are infused with a steely determination that says: “we’re ready boys.”

And, if it is now or never, then mama, they’ve got a collection to turn heads. The de facto first song “Straight Till The Morning Light”  is airy and sun dappled and sees Gabor find a solo straight from the Allman Brothers playbook as it takes it’s own (very sweet) time to make the journey.

Without boring people too much, the way MV reviews albums is to listen on headphones and write bullet points on each song. Those notes on the first few not only said “Allman Brothers” but the brilliant “Doppelganger” featured words like “Black Crowes lick”. “Rumble of the drums” and “superb last solo” and album highlight “High Ride” saw us say “loose-limbed like the Stones” and perhaps most important, this phrase: “rock n roll, pure and simple.”

That pretty much tells you where the band are at, bluesy, soulful classic music, but most importantly, it has no thoughts of being “post” this, “core” the other. Rather Ozone Mama see no shame in being a rock band. One, who you can bet your bottom Forint, would play music by bands like Ozone Mama if they weren’t in one.

There is just a touch of early Rival Sons (that is to say before they got all mystical) about the massive sounding “Feel So Alive” and the rip-roaring fun of the ballad “Shout At The Sky” has a hint or two of Led Zep, but that said, this is a record that has a modernity about it.

The title track proves that. Managing to sound both trippy and primal all at once, before “Freedom Fighters” sounds like their anthem, but most important, perhaps, it is the embodiment of letting your hair down.

“Cold Light Of Day” is another that shows their outright skill. A Mid-paced garage rocker on the surface, but strip away the top layer and you’ll find Székely singing that “I’ve got my needle and got my spoon” in one of the albums more jarring moments.

“The Alchemist” (not a Maiden cover much to MV’s surprise) starts with a huge guitar groove but walks a southern rock path. However, it is the one they choose to finish with here that suggests there is so much more to come. “Moon Pilot” is not only the longest one here (this though is not a record to overstay any welcomes) but it has huge intent as it soars on its interstellar journey.

It shows the confidence the band has, both in each other and their new material. The third album used to be the one. The “Born To Run”, the “Toys In The Attic” if you will. There is no reason to imagine Ozone Mama can’t reach for the skies with “Cosmos Calling”.