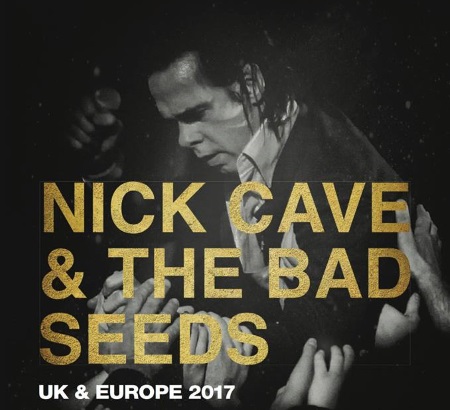 The king of effortless cool and his cohorts march on the East Midlands ready to gather up an army of new admirers 34 years into their storied career.

The Bad Seeds are an institution, in a good way.  Their back catalogue deserves mention alongside the greatest bands of the past 60 years.  As defacto leader of this band Nick Cave has been the face and the voice for over 34 years.

The Motorpoint Arena in Nottingham is the setting for the band’s latest touring cycle, chiefly to promote 2016’s acclaimed Skeleton Tree album which makes up around a third of tonight’s setlist.  It would ultimately prove to be a very difficult process for Nick Cave due to the tragic accident that befell his teenage son, Arthur, as the album was approaching completion.

This led to Cave re-writing some of the lyrics and mood of the tracks to reflect the tragedy of his son’s death and pain that he was experiencing.  Obviously this made for a sombre and dark album, even by Cave’s standards, but there was also plenty of inspiration to be found in the lyrics and music.  How would this translate on the live stage?

Tracks like show opener “Anthrocene”, the trademark apocalyptic visions of “Jesus Alone” and the chilling “Distant Sky” demonstrate the ying and yang of fragility and power perfectly.  On record it can transport you places you may not wish to go but in the live environment there is no off-switch and Cave has the kind of aura and personality to take you there regardless.  Part Shakespearan actor, part evangelical faith healer and all encompassing.

At times the sound is as beautiful and delicate as one of the band’s classic melancholy like “Into My Arms” or “The Ship Song” and at others it’s a devastating wall of noise that would make Motorhead sound quiet in comparison.  Those aggressive and violent musical moments come in bursts of pure energy with tracks ranging from the classic “From Her To Eternity” to the rumbling tones and controlled fury of “Tupelo” and on through “Red Right Hand”.

Cave often leaves the stage and takes his place amongst his people in the crowd.  They treat him as a god and although it maybe something that would naturally not come easy or willingly to him he is content to play the part and ensure that the masses are well fed and nearly everyone gets a piece of the man they have come to worship.

Cave celebrated his 60th birthday a week earlier and the crowd were only happy to remind him.  One fan even brought a card which Cave was happy to display on his piano, although he seemed a little reluctant to read out it’s, probably explicit, content!!

During the encore Cave takes the opportunity to invite a hundred or so of his devotees to the stage to engage in some backing action whilst he and the band belt out “The Weeping Song” and in-particular the strut of the murder ballad “Stagger Lee”.  In truth it proves to be a distraction and adds nothing to the show overall other than to allow some folk to stand about on stage for a bit shaking their arms and wiggling their collective backsides.

It is on their backsides that said hundred or so interlopers reside and the show draws to it’s conclusion with “Push The Sky Away”.  Cave takes his place at front centre and bows down to his subjects in an almost regal manner.

In this day and age real rock stars are few and far between.  The vast majority of modern-day frontmen and vocalists have spent their teenage years watching endless dvd’s of all the most recognisable performers and end up with a bastard combination of them all that fails to convince or surprise.

After 40 years on stage that is not an accusation that could ever be pointed at Cave.  With his trusty and uber-talented backing band he is never anything less that totally convincing and always full of surprises.