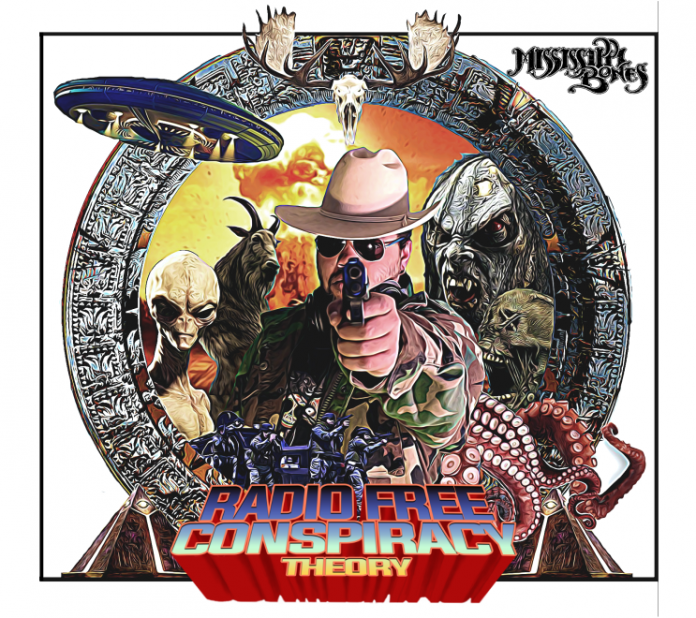 There are a number of Bands that I’ve discovered via Social media whom I cannot fathom how they are not household names. Mississippi Bones are one of them and their last two albums both got full marks when I reviewed them. Their mix of crunching riffs and top drawer lyrics create a Clutch/CoC hybrid that really hits the spot.

Out of the blue I recently received a message from Lead Singer Jared Collins asking if I would be interested in giving their new album a listen – needless to say the answer was an immediate yes and here we now are.

I have to say this has turned out to be one of the hardest reviews I’ve had to write as the album is quite a challenging listen. It’s a concept album like no other and researching the background has proven to be a journey in itself.

JC is a big fan of American author Jonathan Raab, whose books are a mix of supernatural goings on with Sci-Fi influences, all immersed in X-Files style conspiracy theories. Song-writer and author have combined on this album to create 10 themed songs linked together by Public Radio inspired skits, all featuring an imaginary broadcast by Sheriff Cecil Kotto, the central character of Raab’s books. Yep, it does all sound pretty weird but hang in there.

JR wrote the scripts for the radio parts and they are razor sharp, managing to be both funny and thought-provoking. He also cast his eye over the JC’s lyrics to ensure they were true to the characters in Rabb’s books. The songs ‘WXXT’ and ‘101 Ways To Cook A Human’ also involved authors Matthew Bartlett and Sean Thompson and their literary worlds are now intertwined with Raab’s own. Indeed some of the ideas from this album will appear in the next Sheriff Koto book.

So that’s the background but how does that work in the real world? The radio broadcast sections are quite long and do disrupt the flow of the music a little. I’ve listened to the full album many times and have continued to find ‘new’ bits in the scripts so it definitely isn’t a single listen piece. However I believe most music fans will programme out the skits in the long-run and just listen to the music. The intent has always been that the songs should stand up as an album in its own right and I am pleased to say that they do that in buckets. The ten tracks are on a par with their previous albums and they all rock as hard as anything else I’ve heard from the Band.

‘A Paranoiac’s Farewell’ is first up and is a terrific stoner rock style shuffle. ‘Blue Beam Dreams’ is pure Mississippi Bones before we hear ‘Devilry And The Blues In Little Dixie’. This is a really interesting song, starting off with a low-key guitar and vocal intro before a crunching riff lifts off into one of the heaviest songs I’ve heard them do – top stuff. There is no let up with Track 4, the frantic and ferocious ‘Genetic Flashback’. The track thunders out of the speakers, highlighted with superb 50’s surf style guitar licks. ‘WXXT’ is slower paced and quite ominous. It has a Clutch flavour but its homage and not pastiche and is great. Another stand-out track follows, ‘101 Ways To Cook A Human’ speeds along from start to finish before moving straight into ‘The Order Of The Night Moose’, which is more of the same. Before the listener has the chance to draw breath, ‘Ancient Astronauts And Ancient Allegories’ tramples your ears into mush – this could be the heaviest song on the album, made all the better with it’s Doors style organ. There is no let-up as the album nears completion – ‘The Reptiles Are Among Us!’ demonstrates that Clutch/CoC combination better than any of the other songs and the last song (and title track) is brilliant – a classic rock guitar riff that would not have been out of place on a Ted Nugent record from the 70’s over a funky backbeat.

So in essence I’m reviewing two albums here. One is a real labour of love – a concept album that intersperses spoken word with themed music. It won’t be to everyone’s taste but it is superbly executed and it’s already sent me in search of the source books. The other is actually a straightforward rock album that easily stands alongside the Band’s previous work and it actually doesn’t matter if the music is themed to a script, the songs are great whatever their context.

So two albums have to be judged but only one score is needed.