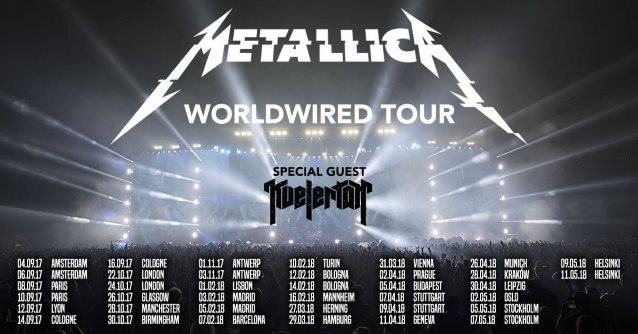 The world’s biggest metal band take over the home of metal in an evening that proves that the band just keep going from strength to strength.

Ennio Morricone’s music, along with accompany video display across the wall of tv screens that hover over the band, introduce San Francisco’s favourite sons.  They stride the stage like the musical behemoths of their own legend.

The in-the-round setup is perfect for the band to get the fans, or the “family” as the band prefer to refer to them, as close as possible.  It makes you wonder why all bands don’t do this.  The fans themselves appear to lap up the new tracks just as much as the tracks they have grown up with.

“Atlas Rise” continues the fresh vibe and by the end of the track half the audience have already shouted themselves hoarse.  Unfortunately for them “Seek & Destroy” is an early inclusion that takes the level up another notch and that is followed by a rare outing for “The Shortest Straw” and the magnificent “Welcome Home (Sanitarium)”.  Not much time to catch your breath and take in the first 30 minutes or so.

Another new track in “Now That We’re Dead” includes a group drum solo that might make you believe that the Blue Man Group were in town, minus the bodypaint!!

The fact that so many great and iconic Metallica tracks were left out of the setlist is a testament to not only their back catalogue but also the strength of the latest album, seven tracks of which were played with the guts, gusto and brutality of long standing classics.

The band have played around with the classics on this tour so tonight saw no “Harvester of Sorrow”, “Jump In The Fire”, “Wherever I May Roam” or “Creeping Death” to name but a few.  However, the silver lining that lines the Metallica cloud comes complete with a rainfall of monstrous riffs and tracks that have defined the metal genre.

More than 30 years of touring and thousands of gigs Metallica are masters at the art of pleasing the crowd.  There is a jovial atmosphere throughout the 2hr 30 minutes that not even an ill-timed power outage halfway through “One” could spoil.  A Hammett/Trujillo guitar & bass rendition of the Black Sabbath classic “War Pigs” is an example of the enjoyment the band have on stage.  It allows Hetfield & Ulrich to take a welcome deserved mid-show break.

Lars Ulrich is positively thunderous as he bounces on his stool and drives the energy of the band whilst Trujillo prowls the stage like a caged tiger.  The guitar duo of Hammett & Hetfield are peerless and are nothing short of full-on tonight.

“Fuel” from Reload makes a welcome appearance and when “Master of Puppets” closes the main set you get the impression that the this band are now entering their prime.  No mean feat.

An encore of the ferocious “Spit Out The Bone” gives way to one of the band’s lighter moments in “Nothing Else Matters”.  Given that the only track that a non-Metallica fan could probably name has not yet reared it’s head means that the ending to this show is about to go off the scale.

True enough, “Enter Sandman” finishes the gig and thousands of metalheads raise their devil horns in the air in respect and admiration for a job very, very, very well done.