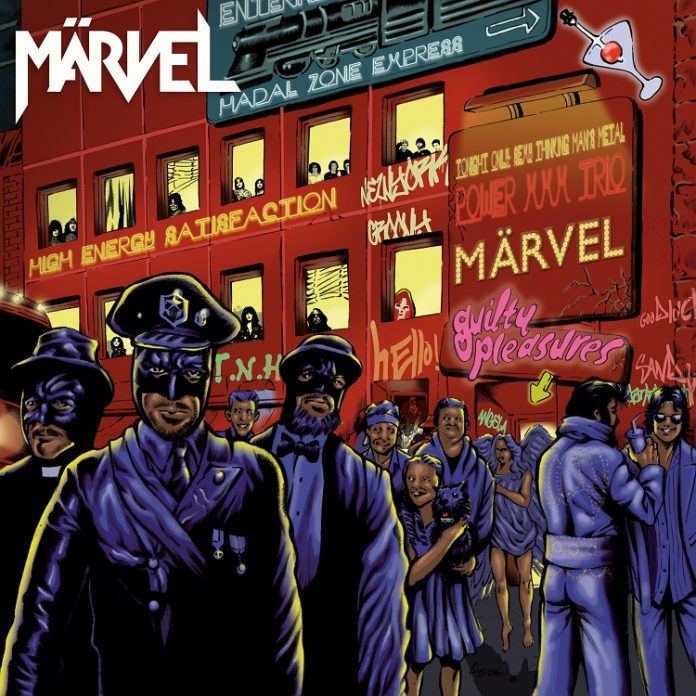 I am not a religious man. I do, though, often think I should have been a Catholic. Everything makes me feel guilty. Whatever I think, whatever I do, there’s always that voice going “oh, you’ll pay for this…..”

One thing I’ve never understood, though, is the concept of “Guilty Pleasures”. I am prepared to back up anything I go and see with the idea that – as the old cliché goes – there’s only two sorts of music, good and bad.

In the spirit, then of confessionals: last week, I looked at the website of the Birmingham NEC Arena about three times a day before deciding not to go and see Busted. Not because I’d lose any credibility, either but because I only knew about five of the songs.

They are belters, though, and you’d best believe if I was in a rock n roll band and we did a covers album like this one, then we’d be doing “Year 3000” and wouldn’t be in the least bit remorseful.

And, actually, this might be called “Guilty Pleasures”, but a) the name doesn’t apply given that some of the greatest songs ever made are here and b) Marvel sound like they’ve never worried about anything, ever.

To get down to brass tacks, as it were, these are 10 superb covers because they adopt what I’ve always turned the Rage Against The Machine approach. On one of their CD singles (anyone under the age of 30 ask your parents) there’s a version of Springsteen’s “Ghost Of Tom Joad”. Now I love Bruce, and I love that tune, but I didn’t realise it was that tune until they got to the chorus.

That’s what Marvel do here. They take these and make them sound them like Marvel.

It starts, apparently with a Kiss song. Never particularly cared for Kiss – not guilty about that either – but I would have liked “All For The Glory” if it had sounded like this (probably…I’ve never heard the original to be honest).

In truth, I’ve never heard “Keep Pushin’ by REO Speedwagon either, but I assume it doesn’t sound like Thin Lizzy, normally – it does here. And since we’re at it and I am duty bound at this point to be clear, this is followed up by a song called “Ten O’clock Postman” which – according to Google – is by The Secret Service. What I can say with certainty is that it sounds like the most immaculate power pop you’ve ever heard.

Rightio, those out of the way. The next one, well the next one is “Powertrip” by Monster Magnet. Now, I don’t care who you are, you aren’t topping the original – just look at the video on YouTube, there’s a real chance it might be the most rock n roll thing ever – but what you can do is make it yours. So, bravo Marvel for adding a piano lick into the chorus and turning it into something like Black Crowes.

This is possibly the finest covers record ever. Why? Well, there’s a Toto song here and it sounds ace. Seriously. “Goodbye, Girl” might be rubbish in real life (it is, face facts) but in this parallel universe it rules.

“Sultans Of Swing” it could be argued, had already achieved perfection, you know, when Dire Straits did it and that, but all Marvel done here is shoot it out of a glitter cannon and glam the thing up.

“El Camino Real” is another from the I’ve never heard file, in honesty. Nor have I come across Lee Dresser who apparently recorded it, but it is Latin flavoured here and is kinda like ZZ Top covering Cheap Trick.

Then there’s “Can’t Shake Loose”. Google (and I hope you appreciate my honesty in a lack of knowledge with half of these) turned up the fact that it was an Agnetha Fältskog song. Now, clearly I don’t know much about anything, but even I know she’s in Abba – you know, one of the worst bands in history. Well, this is brilliant. Deal with it.

Then there’s “Burning Love”. And yeah I know this wasn’t an Elvis original, but he owned it. So what do Marvel do? Give it a makeover, that’s what. Same as they do with “Rock N Roll, Hoochie Koo”. If you can’t compete with Johnny Winter (you can’t) what you do is you make it sound like The Hellacopters instead.

There’ll be those who turn their nose up at this. Those who go “a covers album? That’s a stopgap.” They’re missing out. Don’t overthink anything about this. Don’t be guilty, either. Just savour the genuine glory – and pleasure yourself without worrying about the consequences for once.

Previous article
BAND OF THE DAY: BROTHERS IN ARMS
Next article
THE DARKNESS HAVE CANCELLED EASTER