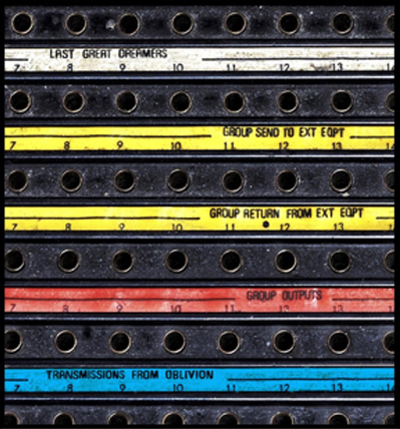 You certainly can’t accuse Last Great Dreamers of wasting time since they reformed.

In the 18 months or so they’ve been back, they’ve stuck out a collection of unreleased material from first time around, re-tooled their awesome debut (the one that saw them second in the Kerrang! End Of Year Awards in 1995) and toured with everyone from Cherrie Currie (The ex Runaways singer and yeah, MV definitely still would….) to Tyla (who we love, but wouldn’t) and Tigertailz.

Now, with their creative core of Marc Valentine and Slyder still at the helm, all that hard work has morphed itself into a brand new album, their first all new one in over twenty years no less, and “Transmissions From Oblivion” is everything you hoped it would be.

Perhaps because of that hiatus, it’s a jam-packed affair of 14 songs, and if people don’t make albums that long any more, then the songs are unashamedly rooted in some past era too. The last thing you’d have wanted is for Last Great Dreamers to go for some modern sound that could have that awful word “core” attached to it, and happily, they stick to what they know, which is namely this: how to write souped-up stomping rock n roll, with a linear route from bands like T-Rex, artists like David Bowie, through to 1990s contemporaries such as the Senseless Things and Honeycrack better than anyone else right now.

For all that, though, initially the opening to “Oblivion Kids” with its pulsing keyboards, comes as a shock, but after about ten seconds it’s clear that they are firing on all their shiny cylinders here. Knowingly and gleefully catchy, it – and all its brethren –  will worm their way into the brain and stay there, “Love To Hate Me” has a punky riff and trademark laid-back vocals from Marc, “Glitterball Apocalypse” borrows its hook from Baddiel and Skinner’s “Three Lions” (to these ears anyway) and “The Way We Collide” knows its way around the early Beatles back catalogue.

So far, so familiar (and great, it should be said), but there are some moments here that you feel Last Great Dreamers have stretched their boundaries, and they do so to great effect on work like “Elegy For Us” a mid-paced, shimmering ballad, and the reflective”Alone”.

If these reveal a different side to the band, it has to be said when they put the hammer down and let themselves go like on “Dope School” (and, yeah boys, we get the play on words here) they are absolutely formidable, while “White Light, Black Heart” and its call-and-response chorus is, as you expected on seeing it live, a real highlight.

Impressively for a record with quite so much material on, there’s barely a dip in quality, “Werewolves” has a thump about it, “You Don’t Work” is gloriously trashy and has a Hanoi Rocks-ish vibe, while “Chasing Heroes” affords itself nearly five minutes to make its fine point, but it’s the almost primal “Turn It Up” that you imagine that everyone here enjoyed and it has a very British feel from this most British of bands.

MV had said on these pages that the Last Great Dreamers album, when it arrived, might be one to cherish. Now it has, we can say for certain that it is. No longer in oblivion, these transmissions could still have the power to transform them in the way they hoped twenty years back.