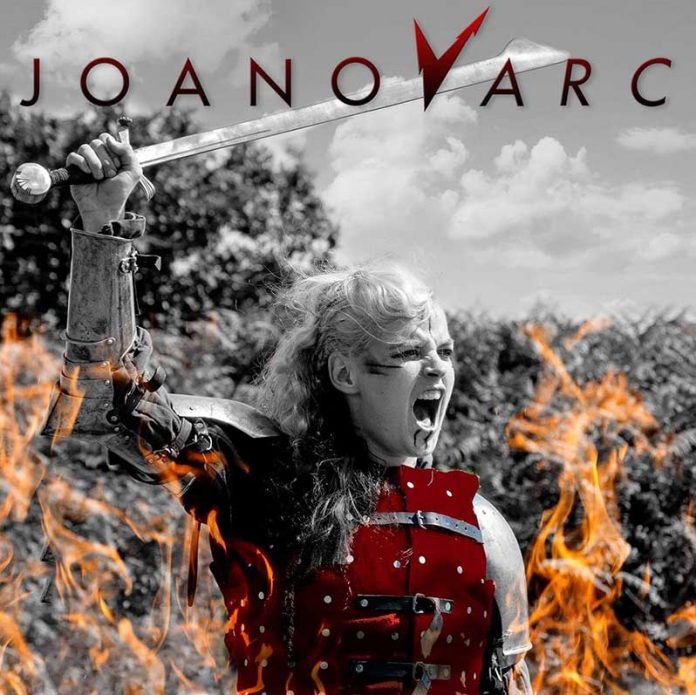 A couple of months ago, my first niece was born. Like all the big family events, you stop and think at these moments. And since February, I’ve been considering what sort of world I’d like her to grow up in.

Chief amongst it, to be totally honest, would be a world where people were judged on their merits and where gender didn’t matter.

On the press pack that came with this – JOANovArc’s second record – there are a number of quotes from the great and the good. One of them says: “these girls can shred….” It doesn’t matter who says it (in fact I adore the person who did, and have no doubt at all he had anything other than good intentions in the words) but the sentiment…. It shouldn’t matter whether they’re men or women, or how they choose to identify themselves. It’s music and one thing matters: is it any good?

“Burning” gets straight down to it. There is no intro of any sort, and it has an anthemic quality. It is noticeable that everything here is arena ready, gleaming and shining.

If that sets the tone then it does so in another way too. Written in the wake of the London riots early in the decade, it is proof, perhaps that this is a band with more weighty thoughts on their minds than merely having a good time.

Saying that, the music is capable of uplifting anyone. “Waiting For” throbs and pulses its way through a relationship that is plainly wrong, but crikey, it’s a good old singalong too.

There are myriad styles across these 11 songs. “Down By The River” has more of a classic rock feel than most of them, while “People Coming Up” has a kind of disco tinge that recalls the work of Night Flight Orchestra, and if the party is over in the lyrics, then the inference here is that you can just do it in a different way these days.

“Take It Out” is the work of a band with a genuine crossover appeal. Cleverer people than me would call it “post” something or other. All I know is that the hooks belong on a more indie radio station than Planet Rock.

“When We Were Young” – perhaps with the same reflections that I have been having recently – is almost country flavoured, that is if the second Oasis record had been a country one.

“Try It On” is sung by rhythm guitarist Laura Ozhull (it is a feature of the band that they have two mighty fine singers, with bass player Samantha Walker taking the lead most of the time) and is a complete left turn.  A real pop song, it almost dares you to do what the title suggests: “just you try…..if I catch you round here, there’ll be blood on the floor” goes one of its lines. It doesn’t sound like an empty threat, either.

“Jane” is probably the best of the lot. In the words of JoA: “It is about a girl who knowingly keeps people who are good for her at arm’s length. It’s a sort of self-punishment for wrong doings in the past.” If it had come out in the late 90s it would have been on the front cover mounted CD of NME and would have got them a support slot on an arena tour with Sterophonics. Rather less prosaically, it shows a band that know their influences and are proudly doing their own thing.

“This Way” is a darker southern rock tinged groover and if I really have tried not to use the words “Hole” and “Courtney Love” in the rest of this, then you can’t listen to the punk infused “Slipping Away” and not think of both.

There is an acoustic reflection at the end. “Go Home” is a gorgeous, lilting change of pace from a band that clearly could be anything they choose to be.

JOANovARC even tell you what they want to be: “We are role models, we want to inspire young females and empower them” say the band. In ten years time, if their career goes the way it looks set to, then I know someone who might just be a fan – apparently George Ezra is her favourite right now, we’ll work on that.