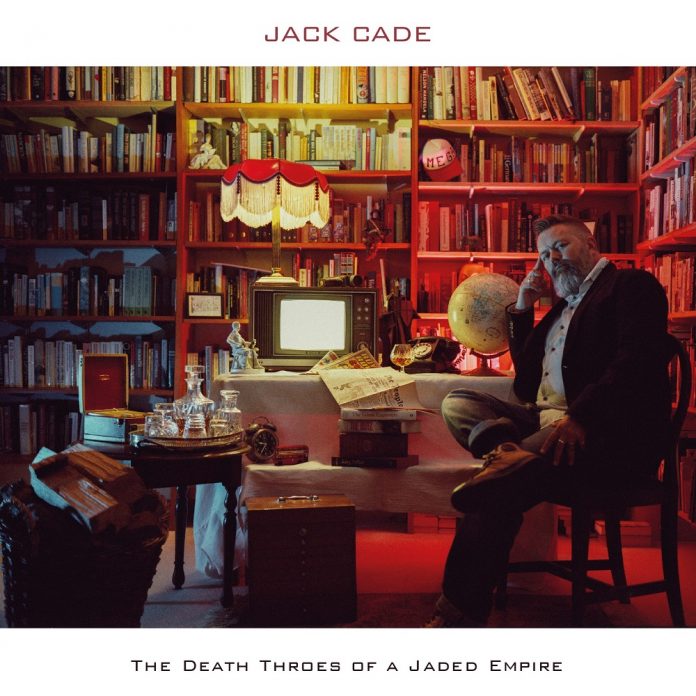 When you Google the name Jack Cade, what you get isn’t the singer from the South Coast.

What you get as the top hit is the Jack Cade who led a popular revolt in 1450 against the government of England.

There must be something in the name, because on his third solo album, 500 years on, this Jack Cade seems to burn with the same rage.

There are times on this half hour where you almost expect a full on punk rock song to start up such is the anger here, but the voice – that roughhewn, almost Cash – is one of an itinerant road dog, a have guitar will travel, lifer, with a ragged poet’s heart.

“It ain’t easy” he muses on the opener, “to peel the fake from fact and see the reasons for the act”, except that’s what he proceeds to do for the next nine songs. “Another man made travesty, blamed upon what can’t be seen” is typical of the acerbic, brilliance here.

And it also must be said that as much as this – ostensibly – is acoustic, it’s the fabulously well-picked out music that you notice after a listen or two. Ben Cox-Smith on Dobro Slide Guitar, Hana Maria on Violin, Adam Perry and  Mark Tudor with some drums and percussion are all integral to the mix.

But it’s the voice, it’s the lyrics that you can lose yourself in. “The Amber Lights” is folky and brings home the bleak nature of a faded seaside town. Cade is from Brighton, but it could be anywhere.

“The Awakening” – opening line “history belongs to the winners, don’t matter if they are the sinners” – has echoes of MV favourite Amigo The Devil, while there’s a raw, blues feel about “Saviours And Sinners”.

So many of these have a dark heart when you peel away the layers. Occasionally you don’t need to. “Night Terrors” plunges you straight into the type of maelstrom of confusion that The White Buffalo uses as a starting point.

“Some Bruises Don’t Fade” comes from the same place, a real rage flows through it “questions with answers nobody knows” is the type of thing that keeps people awake at night, while “What Do People Say” takes the ephemeral social media, fake grief to task, and has something akin to the anthemic feel of The Levellers too.

“Setting Fires”, however, is the type of thing that men and women with battered old acoustics and a penchant for poetry have been doing for centuries – albeit Nick Cave might like this one and you can see it on the next series of Peaky Blinders when Tommy Shelby is wracked by guilt.

“Deep Blue Sea” attempts to end on a high note, or if not a happy feel, then at least some light at the end of the tunnel. “Little worries they may circle, like crows in a murder” he offers, before offering to the sun shining down from overhead. Oddly incongruous in the context, yet somehow in keeping.

There are some singer/songwriter albums that are pleasant, there are some that deal with the world around them, some are ruminations. It is, in honesty, difficult to say which this is with any great certainty, beyond the fact that “The Death Throes of a Jaded Empire,” could never be filed under “easy listening”. It is, though, as rewarding as it is bleak.