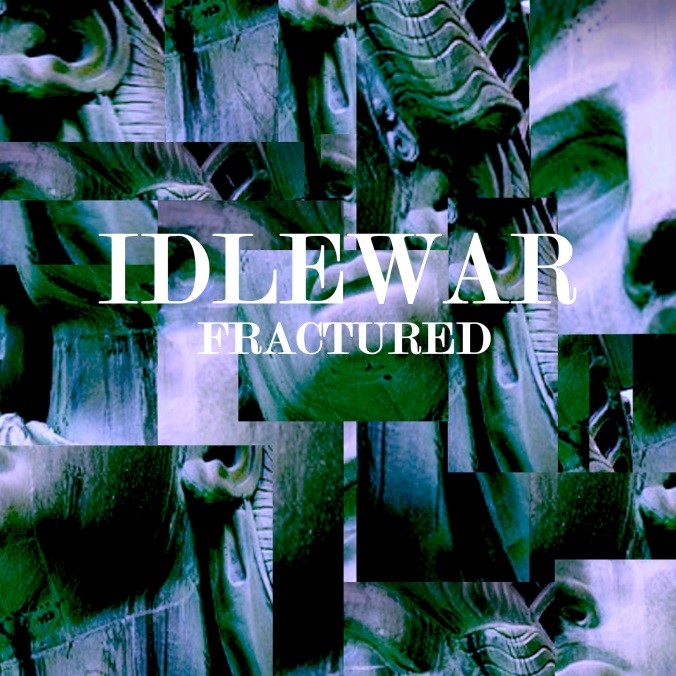 All of us writing on Maximum Volume have a Band that we love and champion at every opportunity but who remain a bit of a well-kept secret as far as the rest of the world is concerned. For me that Band is Idlewar.

Fractured is their third full album in as many years and follows last year’s excellent ‘Rite’, which combined with an appearance at Hardrock Hell and a short UK tour, saw them gain a bigger foothold here in the UK.

The Band, James Blake on bass and vocals, Rick Graham on guitar and Peter Pagonis on drums, have been working away on the album since returning home after their UK visit and they are now ready to release Fractured to the world.

Compared to previously releases Fractured is a bit darker, a little harsher and not quite so immediate. However persevere and the layers of the songs start to be revealed and it’s clear that this is the hardest rocking set they have produced.

A tape loop announces opening song ‘Turn To Six’ before a monstrous riff is played, though it has been turned down in the mix to sound as though it’s being played in the next room. This creates a really dramatic effect as it kicks in for real. The music simply thunders out of the speakers and I defy anyone to find a heavier 30 seconds of music on any record released this year – so turn to ten on the dial when you play it. The song has the first of 11 passionate vocals from James Blake and the first of 11 great solos. It’s a brilliant opening song and I hope it’s in the live set when they tour later in the year.

‘Turn To Six’ merges straight into the next song and first single ‘Escape’. With its machine gun riff and big chorus, it’s an obvious candidate for the lead track and it’s sure to become an Idlewar favourite and will played on stage for years to come.

Track 3 is ‘Stab’ and it has a real ‘Them Crooked Vultures’ thing going on, with it’s slightly odd timing and choppy guitar riff. It’s a bit of a departure from their normal style but it works well and the contrast it provides is a good move.

After such a frantic start Track 4 ‘Drama’ is a welcome relief. An almost funereal beat and sparse instrumentation allows this song to breathe and its show-time for the albums strongest vocal performance, with the music playing a supporting role. This song weighs in at 6 minutes long which is a first for Idlewar but it works well and never outstays its welcome. In fact it almost starts to become trance-like after a while but the listener soon wakes from that as ‘Rage’ starts. Probably the most traditional Idlewar song in the set, with a great riff and pounding rhythm section, it’s what Idlewar fans have come to expect and its terrific – it also has one of many great solos on the album and fans will love the riff, drum fill and solo that comes after a couple of minutes – a highlight in a great song.

‘Alone’ is next and as well as having a bit of the aforementioned ‘Vultures’, there is a big hint of ‘Temple Of The Dog’ and ‘Soundgarden’ about it. James Blake has a little bit of Chris Cornell sound to his singing and musically there is a real link on this song as well.

This applies even more on the next song. If you told me ‘Demented’ was an extra track that never made the original Temple Of The Dog album then I‘d have no trouble believing it. Furthermore if I was told that the solo was Billy Gibbons making a guest appearance on this long-lost song then I’d believe that as well. The solo is just brilliant, big and bluesy and right on the money in the context of the song – take a bow Rick Graham.

‘Enough’ follows and it’s another song with single potential and rhythmically it has a Led Zeppelin feel to it. The chorus and riff combination is really catchy and will have the fans singing along.

‘Perfect Disaster’ is really different to other Idlewar songs as Pete Pagonis pummels his drums into submission with a shuffle on the snare that must have left it feeling like Anthony Joshua’s punch bag. The chorus is thick and heavy and it’s another song I’m hoping to hear live as I think stage amplification will take it to another level.

‘Odd’ is pure Idlewar and again has that ‘Temple Of The Dog’ think going on (think ‘Pushing Forward Back’ to those familiar with that landmark album). Another cracking solo on this one which is underpinned by the locked-in bass and drums, which are again tighter than two coats of paint.

That brings us to closing track ‘Hope’. An interesting song to say the least – it starts as a normal Idlewar song but this listener was not prepared for what happens halfway through, as the song changes into a maelstrom of wailing guitar and feedback. It’s a challenging end to the album.

Challenging is actually an apt word for the album as a whole. It’s as heavy and riff-laden as their other albums but the darkness I mentioned before is there. It is a much more intense listen, maybe not as easy on the ear until familiarity starts to take hold. However I’ve been living with the album for the past six weeks. In that time the greater depth of the songs has made the album a real grower and I think it’s exactly the record their fan base will be hoping for. A word too for the overall sound – it’s a really great sounding record and compliments go to Pete Pagonis for the production duties and to Jethro Chaplin, who mixed the album here in the UK – good job guys.

So there it is – Fractured. Idlewar’s offering to the world for 2018 and in difficult times we need an album like this.

PS – Idlewar will be touring throughout the UK in November; details can be found using the link below