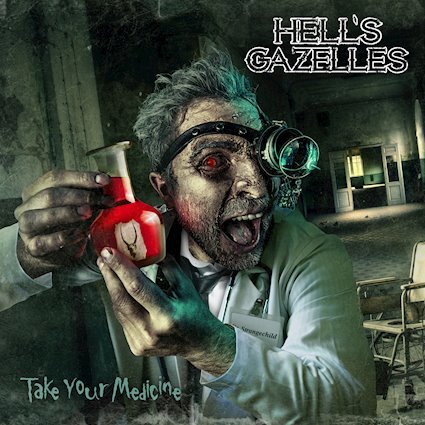 The record industry of this millennium is an entirely different being to the one I grew up with. As a result my inbox regularly gets releases like this for review. Hell’s Gazelles are one of a large number of British bands that 30 years ago would have been signed up to a major label and with record company support would have done a first album and then been sent out on tour supporting the big bands of the day. These days it’s a pretty much self-funded affair and EP’s seem to be the way most bands get their product to the market and they then look to create interest via Social Media whilst playing any gig that comes their way.

The interesting thing for me is how these Bands are producing such a professional recorded product on limited budgets and in this respect Hell’s Gazelles are no different, on this their 2nd EP. Where they do lift themselves above many competitors is with the sheer gusto and quality of their songs. With their roots firmly planted in the New Wave Of British Heavy Metal, they are a slightly heavier version of The Darkness but minus the seaside postcard humour.

‘Give Me Something’ is a cracking opener with a vocal performance that is a hybrid of Justin Hawkins and Rob Halford over a thundering backing track – it’s a great way to start things off.

‘Stone Cold’ is the lead single and for good reason. It’s still rocks hard but with a swagger and funk that Aerosmith would be proud of.

‘Out Of Time’ has a big riff and a really old school sound and the musicality of all involved shines through.

‘Take Your Medicine’ is for my money the best thing here. As heavy as the other songs, it also adds a greater commerciality and will see them rival competitors like Stone Broken and Mason Hill for radio play.

‘She Devil’ is the last of the songs and it’s another cracker. With a big 70’s style riff and sing-along vocals to match, this song is the epitome of modern hard rock.

Whether these five songs will be a stepping stone for Hell’s Gazelles to go on to greater things the market will decide but the guys can take pleasure in the meantime that they have done a top job on this release.

Take Your Medicine is released on 27th July 2018